Hello, this is KYO.
As with other writers, I put on the genuine tele conversion lens this time and took some snapshots in Ginza.

Since some of you may not be familiar with the details of the lens, I will share with you some detailed information about it.

The tele conversion lens GT-2 is for GR IIIx only. To use it with the GR IIIx, it must be used together with the dedicated adapter (Lens Adapter GA-2). 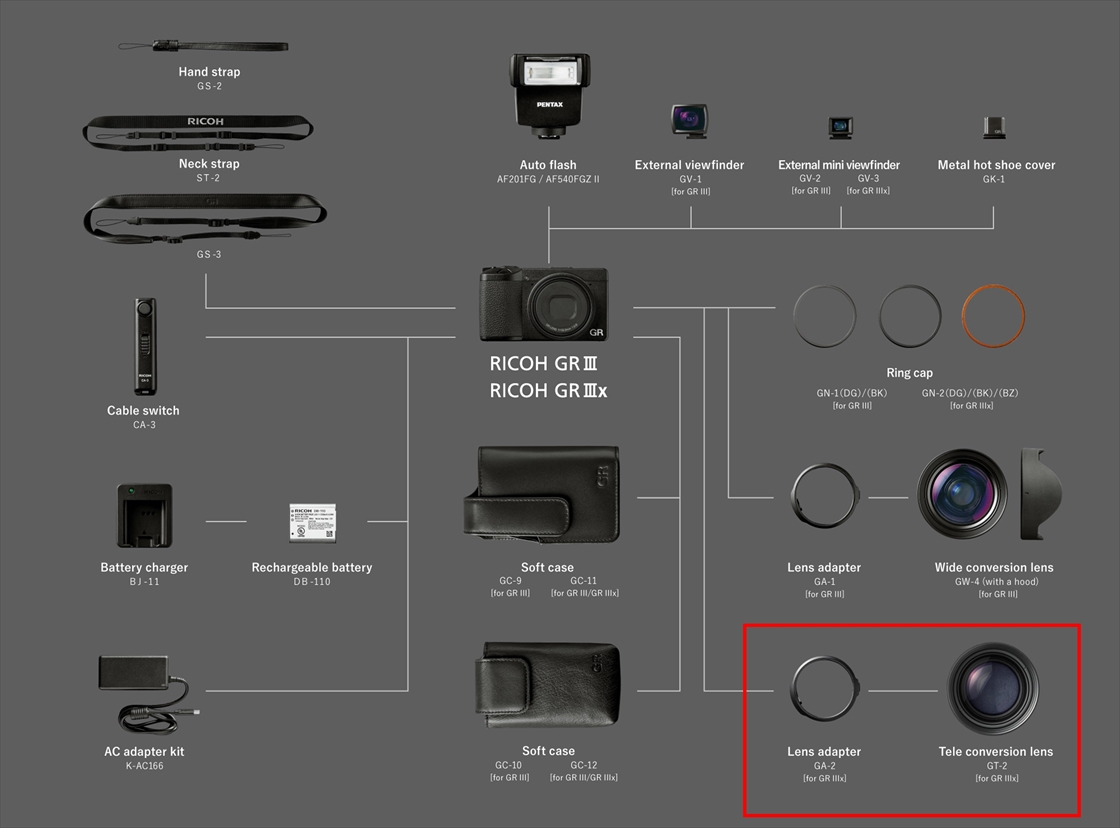 It looks like this when mounted. Although it covers the telephoto range, it has a good weight balance that can be firmly held by both hands. 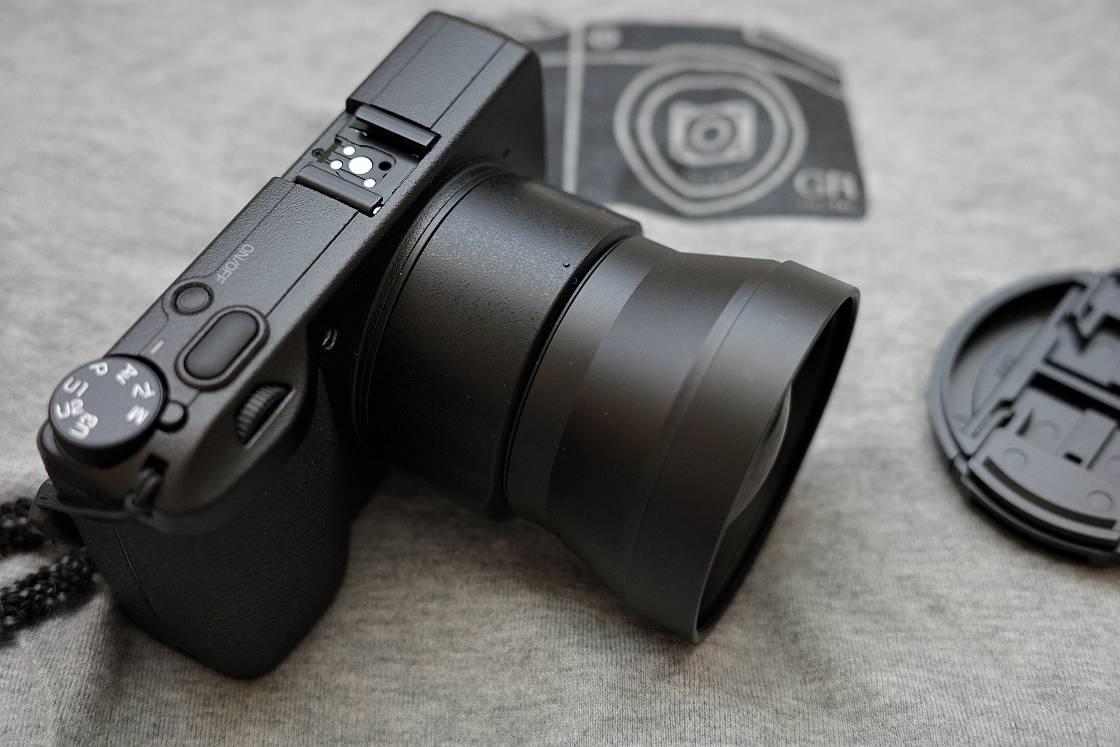 - The diameter of the lens adapter GA-2 and teleconverter is 49mm. A 49mm filter, which is most familiar to Pentax users, can be attached instead of the tele converter.

- The outer aperture of the tele converter is 62mm, which also accepts filters and common lens caps, allowing them to be shared with other cameras as long as the size is compatible. 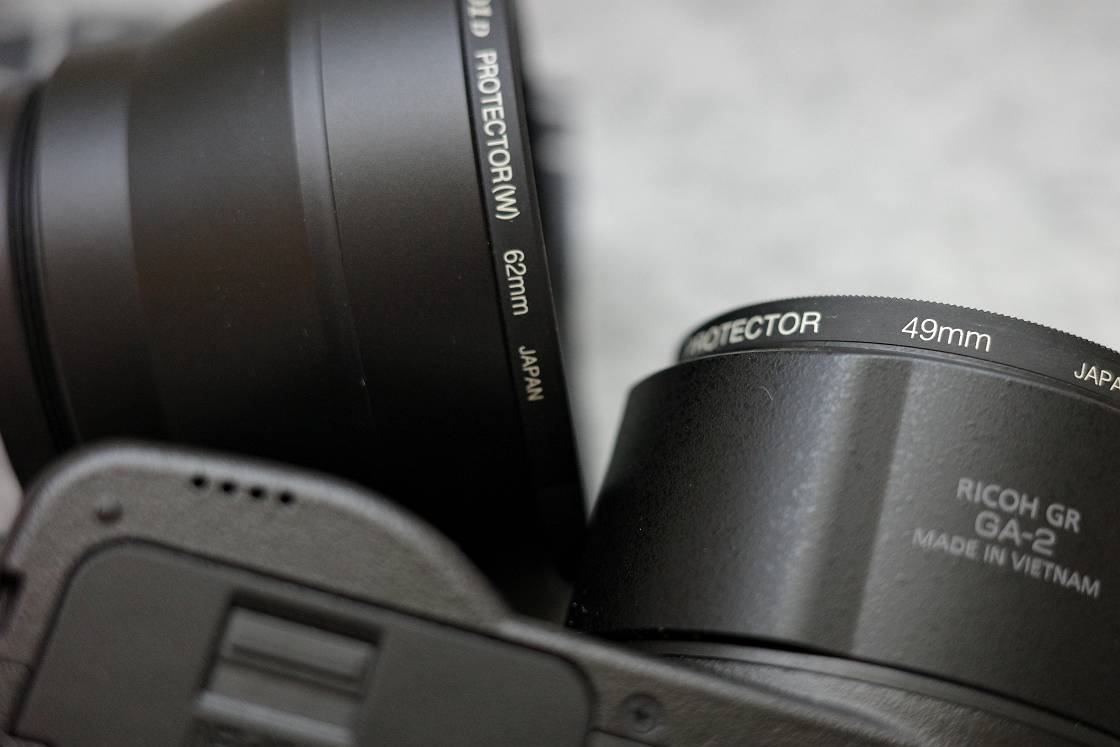 The converter is deeper (longer) under the screw, and when attached, the claw inside the lens adapter is pushed to recognize it is the tele conversion lens. 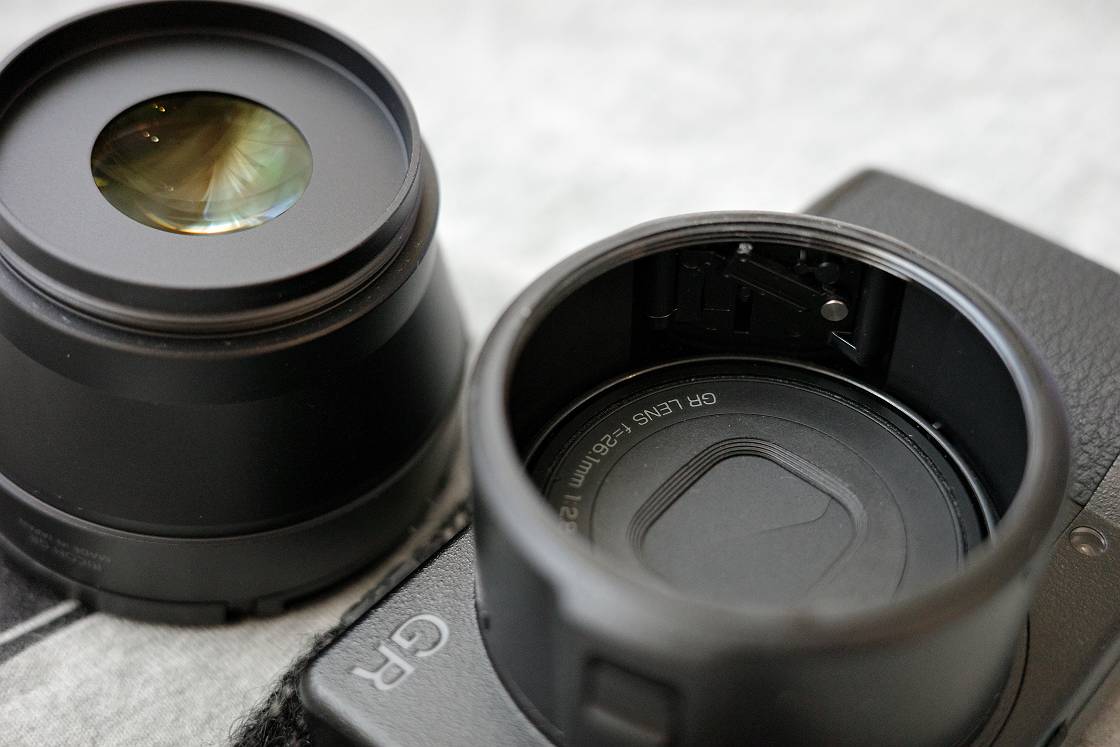 When attached, you can shoot at a full-frame equivalent of 75㎜ or cropped 107㎜. I personally don't like the displays, but here is the relationship between the displays and angles of view when the lens is not attached and when attached.

Something like that.
It's best to simply remember "75㎜" and "107㎜" when the tele conversion lens is attached.

A tip for switching crop (in my case). I customize the function buttons and assign the crop function to the video/radio button on the left side of the camera, so that a short press toggles the crop.

I recommend this because it allows you to intuitively crop the image as if you were changing lenses. 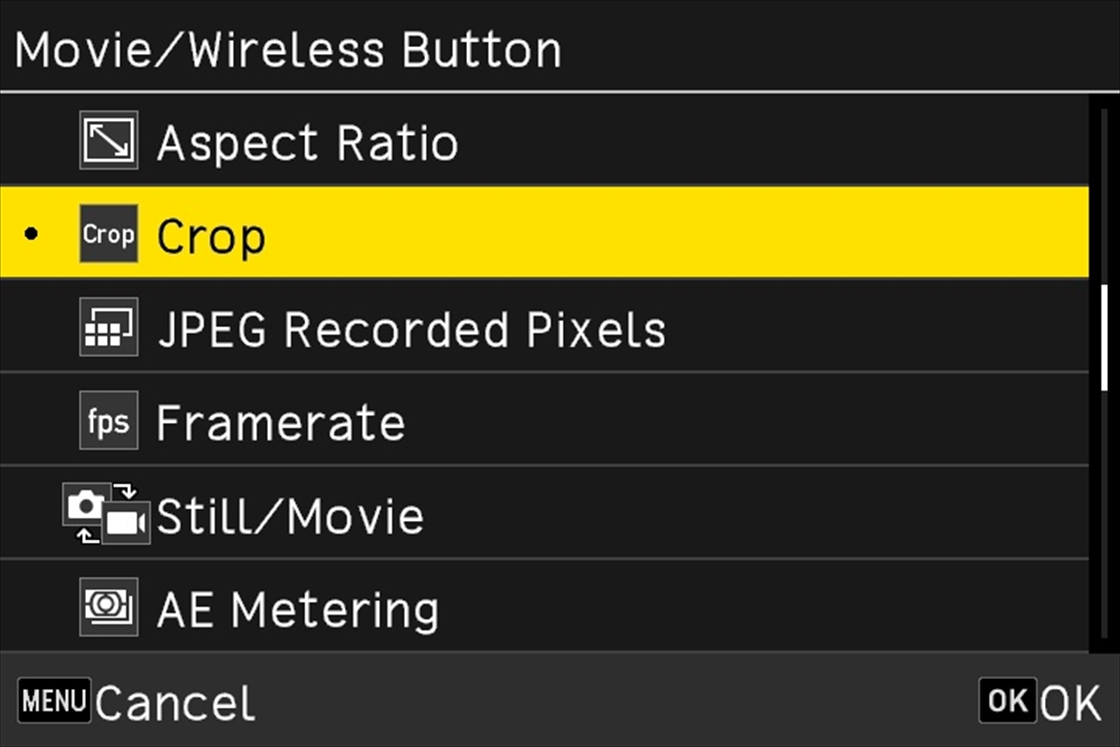 Well, that's all for your preliminary knowledge of the tele conversion lens.

I went to Ginza in late autumn, approaching the holiday season. This fall, for the first time in several years, the angel returned to Ginza. I wanted to photograph it among the crowd, so I used the 107mm equivalent teleconverter to shave off the surroundings. 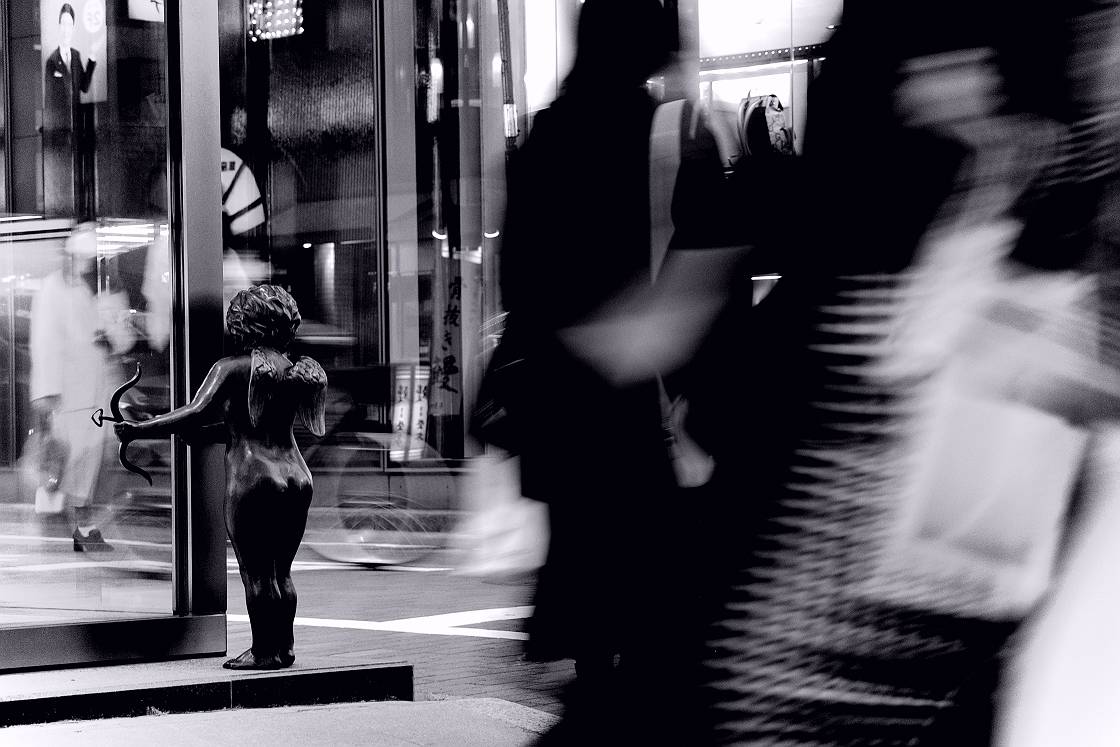 To contrast the flow of people and the static angle, I dropped the shutter speed to 1/10 and pressed the camera against a nearby fixed object to depict movement by blurring surrounding objects. The medium telephoto angle of view gives the impression of gazing at the subject in the city.

I used an odd setting to soften the image a bit, changing from the sharp Image Control of Hi-Contrast B&W.

This is how it looks like with the teleconverter equivalent to 75㎜. 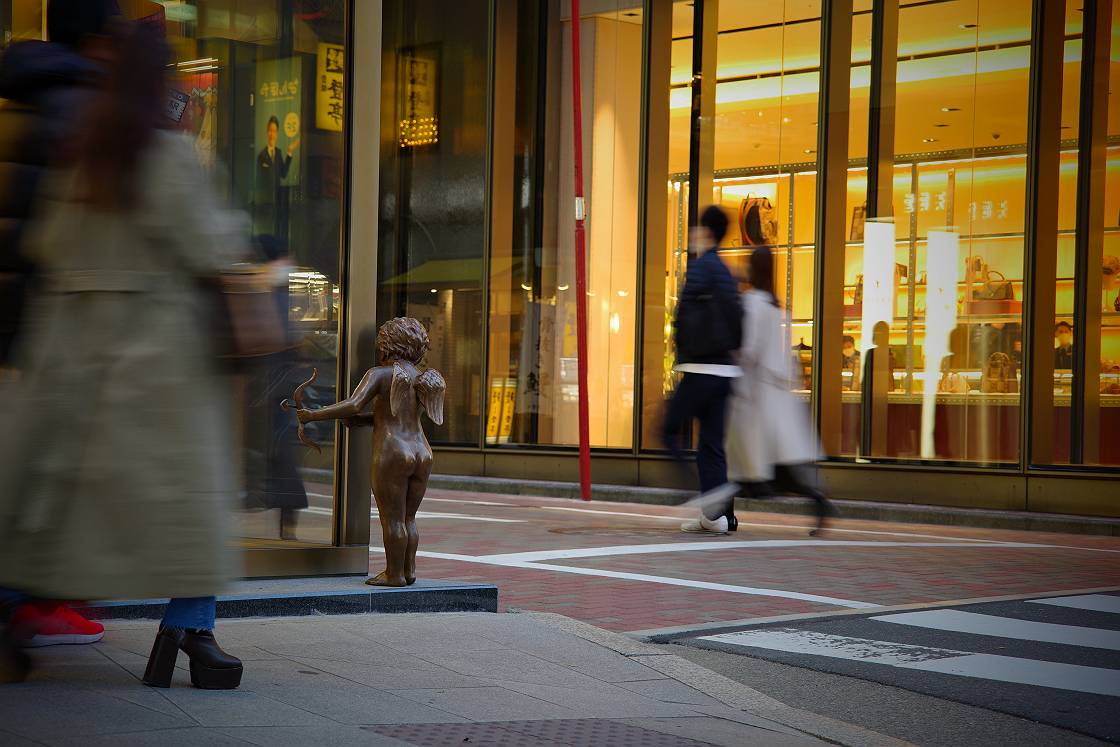 By adding a little more background, you can now recognize people walking around. Vivid, a little less vignetting (-3).

This is 40㎜ color without teleconverter. Looking up the street from 4-chome to 6-chome in Ginza, the autumn sky with scaly clouds was beautiful. Reflected on the glass walls of the buildings, the city seems to be absorbed into the sky.

I shot in RAW and applied a little HDR for Image Control to give it a bit of crispness.

B&W Lupin (Looks like they are back in business) 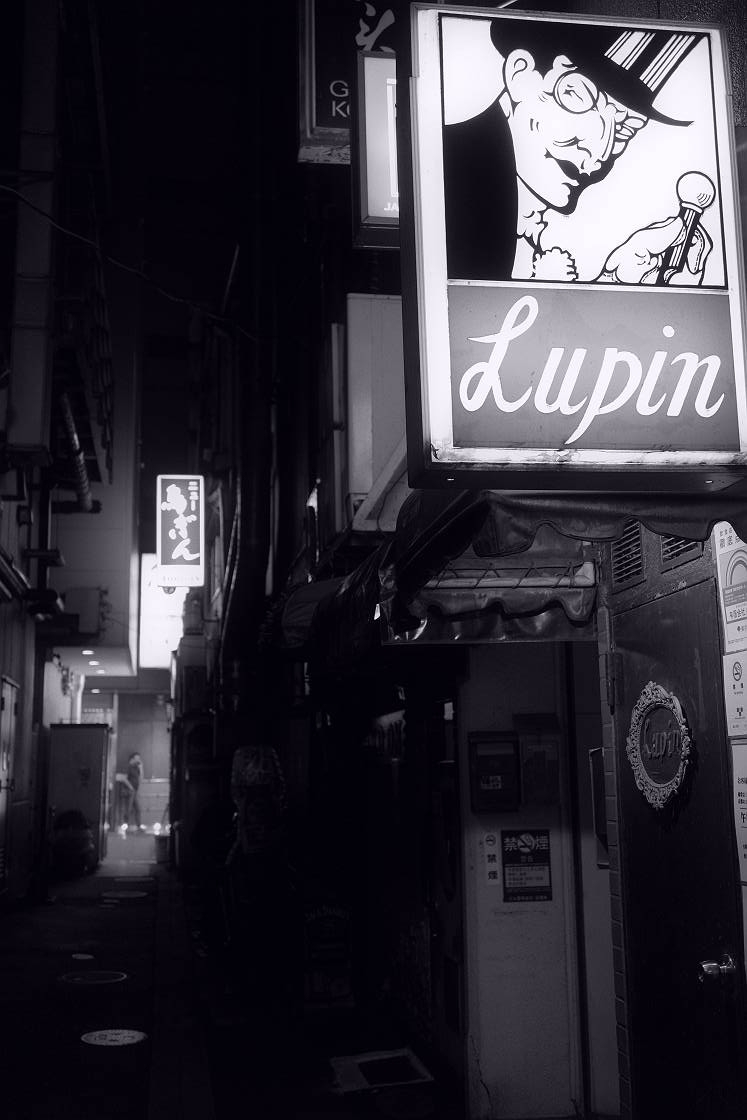 The last one is a shot with the GR III 28㎜. I tried to capture Ginza around the time of the big summer event. 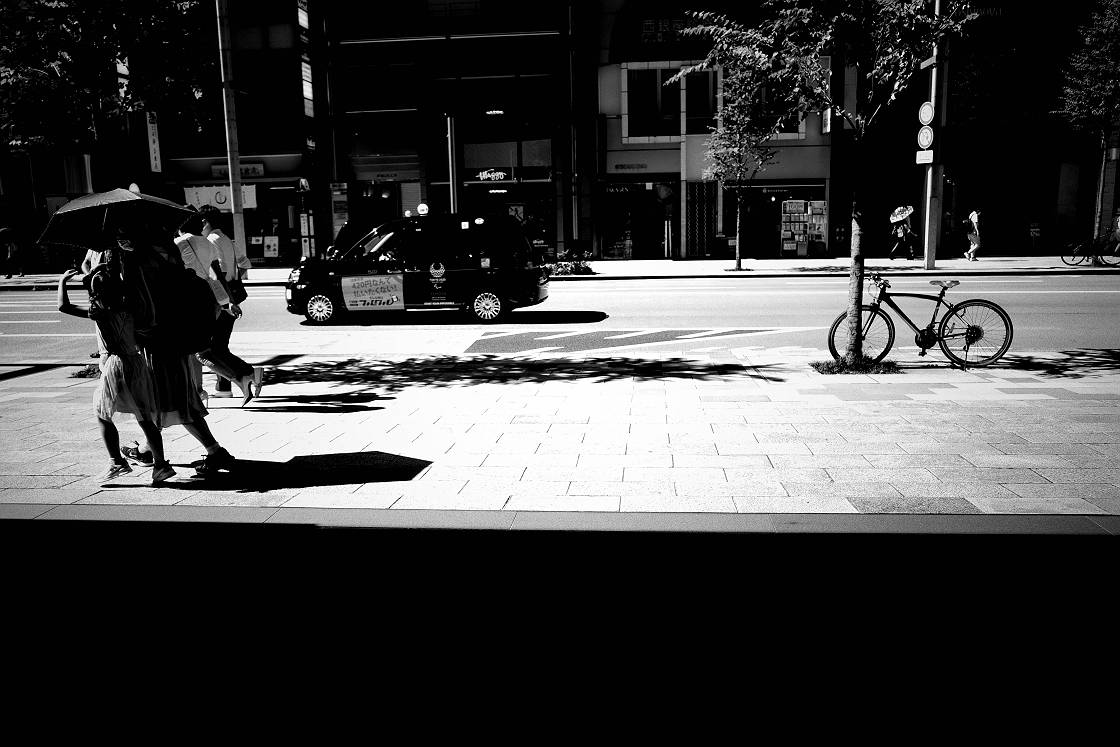 Ginza is beginning to get more crowded now that the pedestrian paradise on weekends has been resumed. The risk of infection still continues. We should stay cautious and motivated.