"What is a good photograph? And what is the camera that produces it?"

I'm Okubo, the app developer, and I've been rushing around with my daily work, and meanwhile asking myself such an exaggerated question that can never be answered. This time, I am here not to talk about apps, but about photography. In the past, I wrote about "blurry, shaky and rough" photos (in Japanese), and this time, I would like to go further back in time.

When I think of "blurry, shaky and rough", the first person I recall is Daido Moriyama, and one of the photographers who influenced him is Nakaji Yasui (Moriyama published a photobook in homage to Yasui's photographs).

Yasui belonged to the Naniwa Photo Club in Kansai. It was a group of amateur photographers that was established in the Meiji era (1904), coinciding with the spread of cameras.
On the other hand, in Tokyo, the Japan Photographic Society was established. One of its founders was Shinzo Fukuhara, a famous amateur photographer and the founder of Shiseido. Let us look at Fukuhara's photographs here for your reference.

If you look at a series of photographs he took in Paris called "Hakurou", you will find that they are very softly depicted and look like paintings. The expression that was popular in that period was called pictorialism, a photographic expression that branched off and evolved from pictorial expression.

Pictorialism was also dealt with in the Naniwa Photo Club, to which Yasui belonged. The technique was to make the photo look like a charcoal drawing by using the rubber printing method or so-called zokingake method (a method to apply oil paint to a printed photo by stretching it with a rag). Personally, I like Ori Umesaka's photographs, particularly the one with poppy flowers, because it inherits Japanese paintings (it's so cool that it's got his stamp of approval on it!). You can find it in the catalog of the Naniwa Photo Club.

Pictorialism used to be considered an imitation of painting, but it is highly regarded nowadays. In the second episode of "GR TV" on YouTube, the lecturer Ryo Ohwada explains "Alfred Stieglitz" in detail (in Japanese). You can learn about the beginnings of straight photography (photographs that capture scenes as they are), in connection to pictorialism. Please watch the video so that you can find this article more interesting.

Enough for the long introduction. Now, let's get closer to this expression with the GR.

Pictorialistic photographs are often expressed in a soft-focus-like manner. But I am not particular about soft focus, since some pictures, such as Ori Umesaka's work, cannot be considered soft focus.

Regardless, we want to reduce the resolution as much as possible. Since there were no bright lenses available at the time of Pictorialism, the aperture should be F8 or more closed, the ISO rate should be high if possible.

I used this cosmos photo as a base for RAW development. 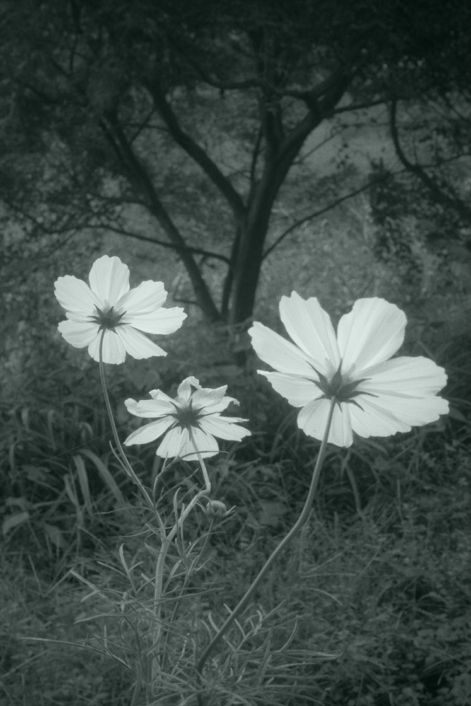 I apply Soft Monotone as the Image Control, avoiding complete black and white and changing the toning depending on the picture. In this case, I used green.

The idea is to keep the contrast low and make the image as soft as possible.

Well, something is still missing.
Yes, we are missing something equivalent to the post-processing- zokingake method. So, let's apply "Base Parameter Adjustment" to reduce the contrast more.

This time, I applied the "Base Parameter Adjustment" twice.

I think it looks good now.

Shinzo Fukuhara also shot street snaps. I would like to make it a soft-focus look here.

I heard that they oiled the lens at that time, but we don't want to go that far. Let's blow on the lens, instead. (Note: do it at your own risk!) 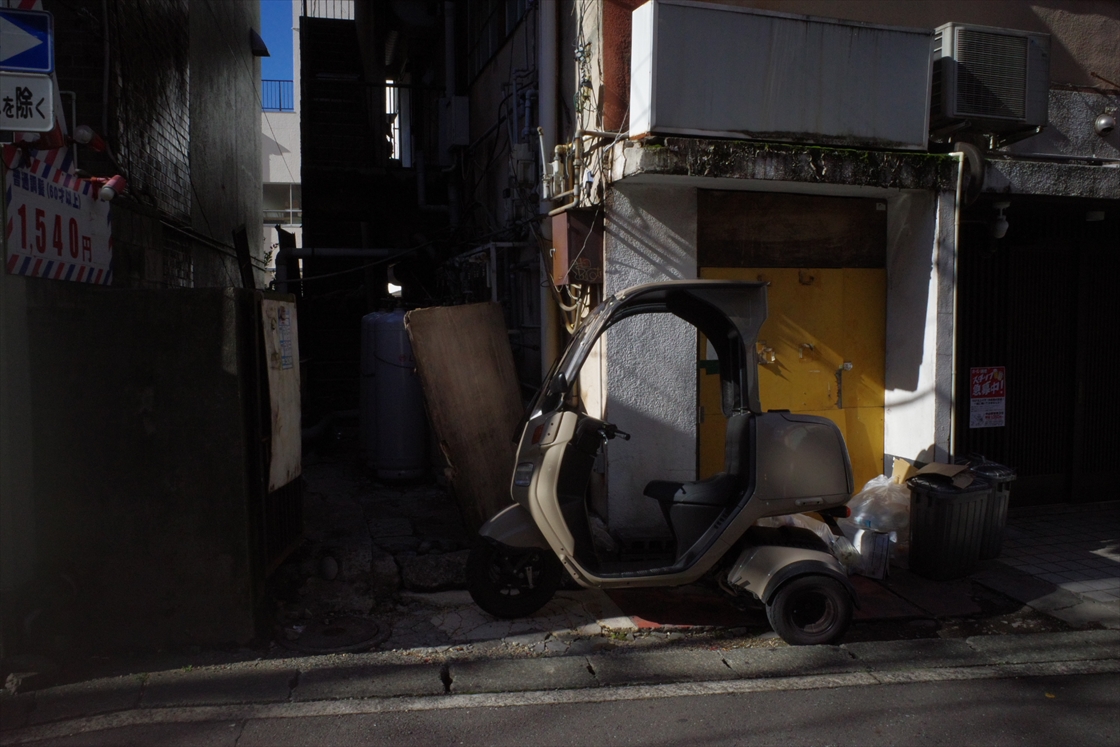 This is what the picture looks like (I think it turned out pretty thick). 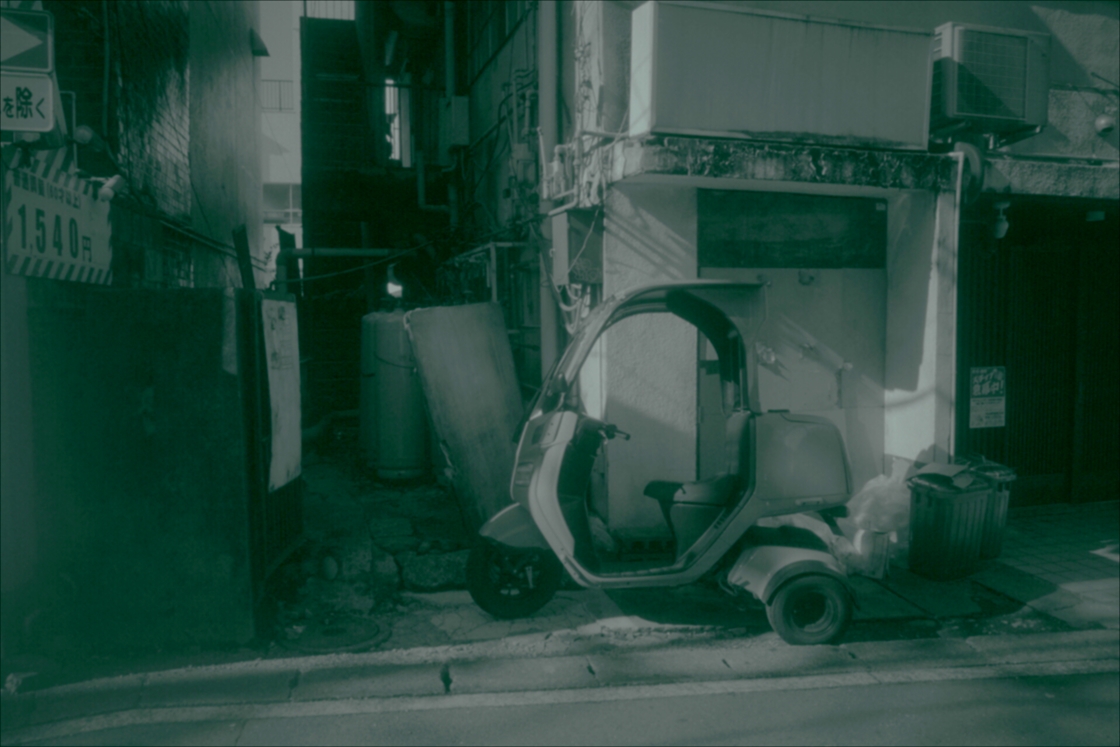 Take a look at some more pictures that I made. 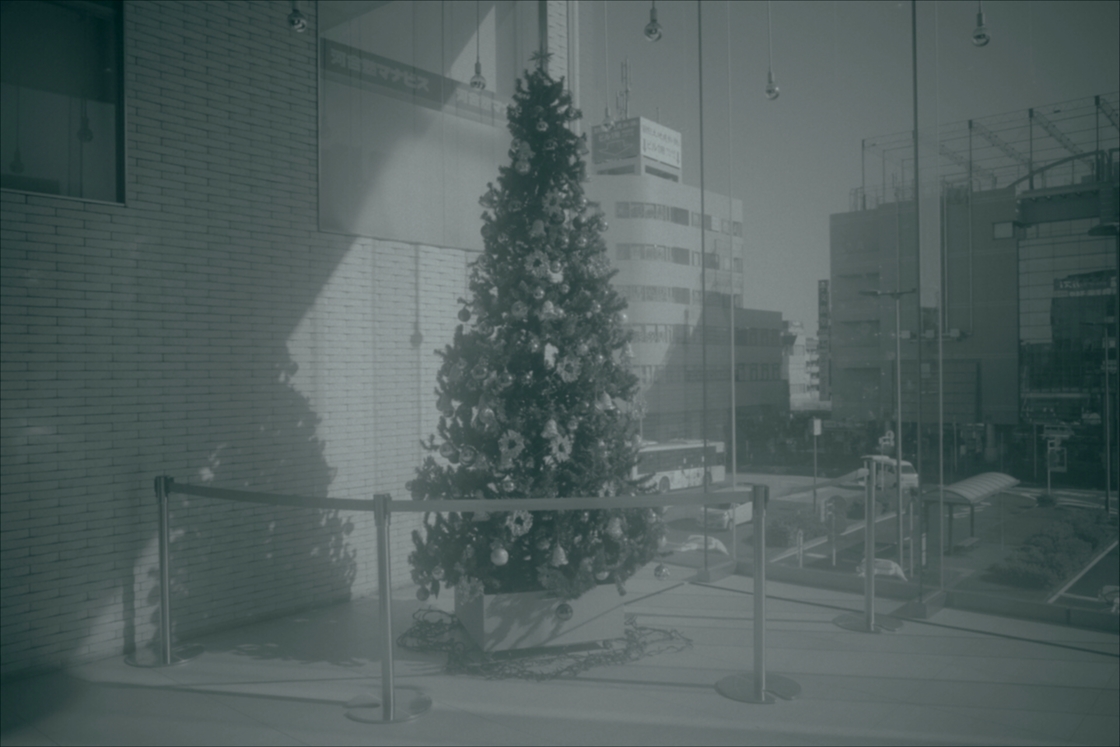 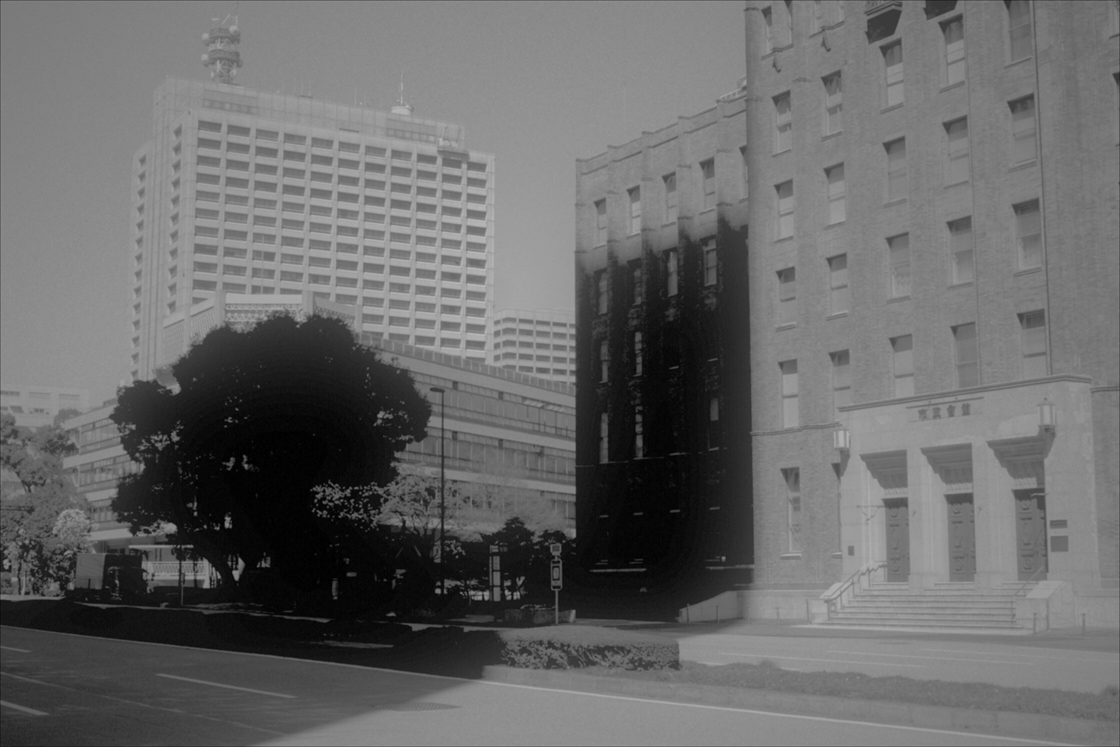 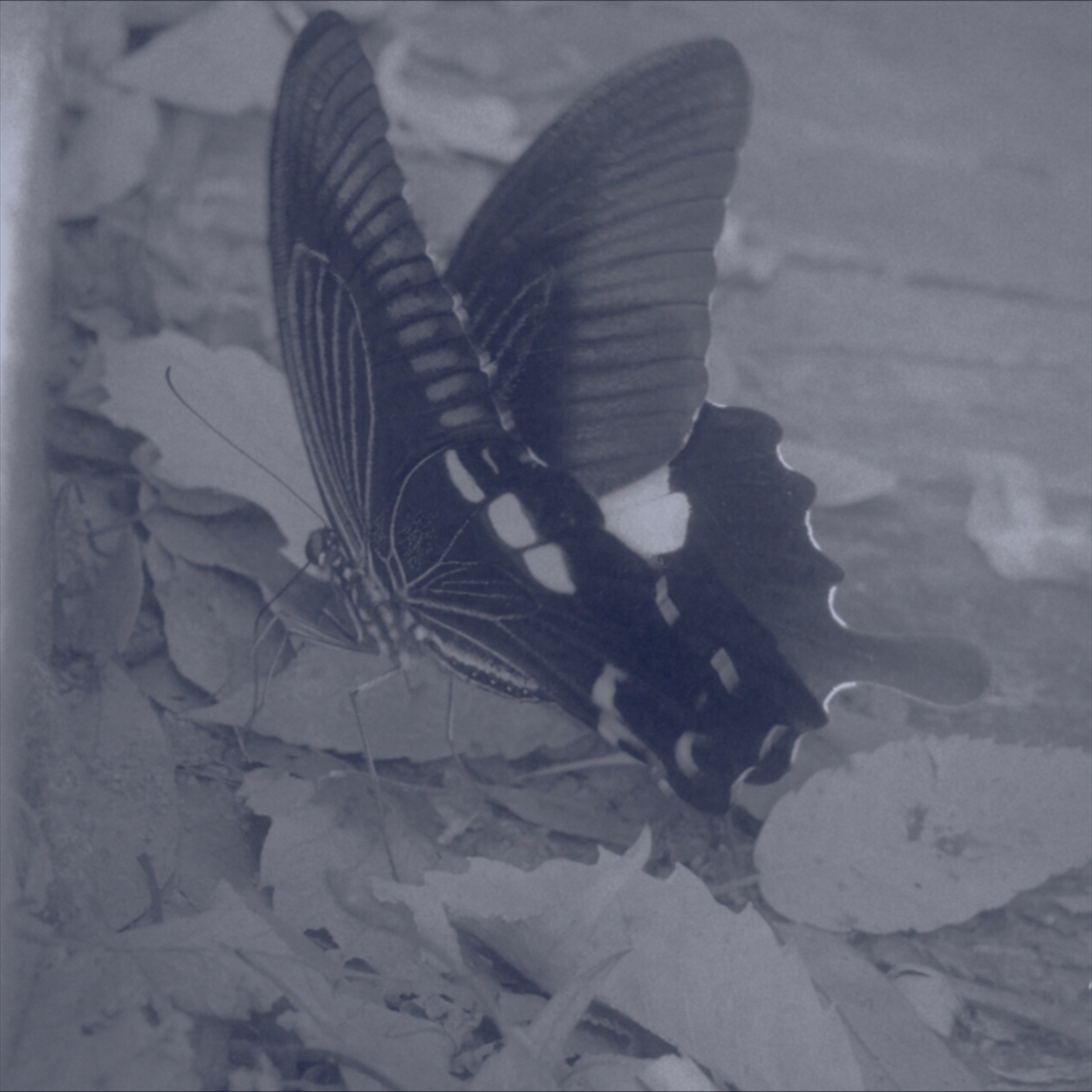 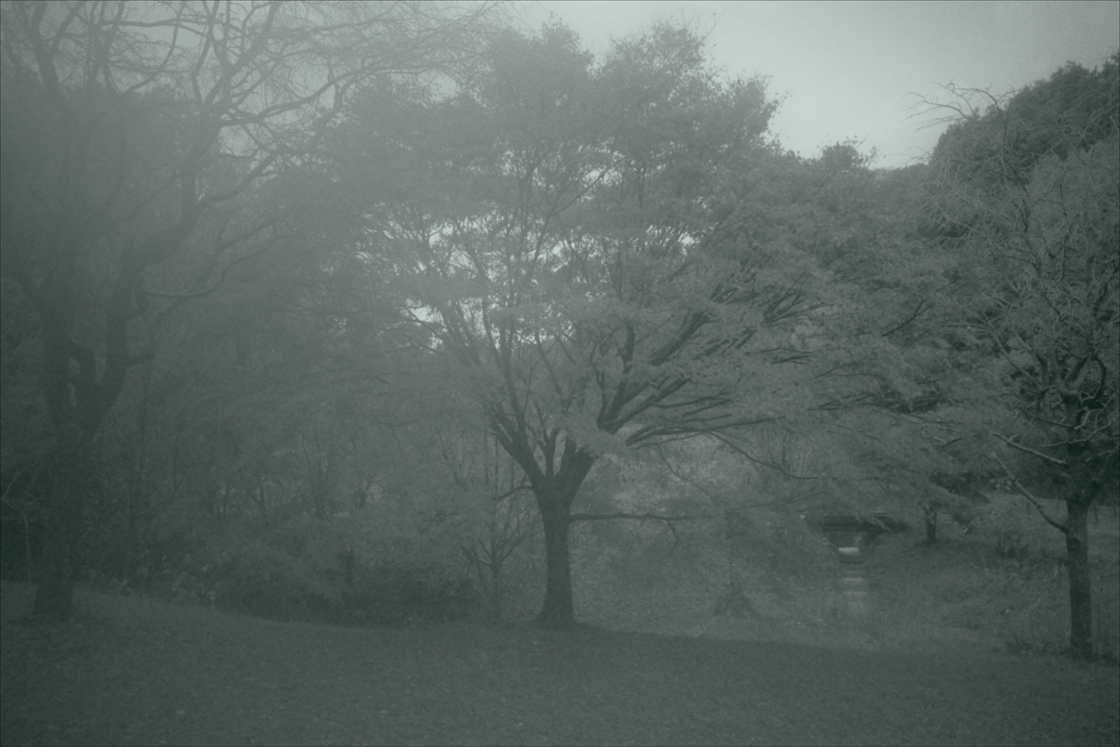 I think they turned out to be pretty good.

When converting to black and white, you may choose between "Monotone," "Soft Monotone," "Hard Monotone," or "High Contrast B&W" in the Image Controls depending on the circumstances. You might as well change the parameters of "Base Parameter Adjustment" based on your taste.

Before it's done, the work goes through several processes, which are the recipe for that particular piece. In other words, it is a one-of-a-kind work that you create with your own sense of style. No one else can imitate it. You basically express everything in one piece in pictorialism photography.

Speaking of expressing everything in one picture, yes, that's right, Instagram. Looking at the hashtag #pictorialism on Instagram, there are only about 50,000 pictures (#GRsnaps about 620,000). There doesn't seem to be that many pictorialism photos out there. That's a good opportunity, I think.

The art scene has evolved by questioning the expressions before. Since the spread of digital photography, sharper photos with higher resolution have been favored. You may, however, post pictorialism expressions as the antithesis of that trend.

I had quite a lot of fun doing this, but I came to wonder what the difference is between painting and photography to begin with. I would like to think about this as I work.

Try experimenting with your own sense of style. You may discover a different world from the one you usually photograph.

“Everyday Snapshots Pictured with Sensitivity" by mookio from Taiwan! (Machuko@)