I started taking photographs at around the age of 21.

I was completely fascinated by her the first time I visited Spain, where I had been taken by my aunt saying "Won't you come along and carry my luggage for me?" I wanted to visit Spain again so bad that I chose the Alhambra Palace- a World Heritage Site in Granada, Spain for the theme for my graduate thesis as I was studying landscape architecture at university. As soon as I decided to do so, I applied for a short-term intensive course in Spanish, reserved a hotel and an airline ticket, purchased a single-lens reflex camera, and traveled to Spain by myself.

Before then, I would use disposable cameras and compact cameras. I remember the excitement with a warm sensation that I felt when I picked up my single-lens reflex camera.

The main photographic focus in Spain was on the bachelor thesis materials such as the arabesque walls in the Alhambra and the waterways from the Islamic era, but looking outside, the landscape under the high September sky was so abundant and charming that I naturally started taking snapshots. Not having recognized it as snapshooting, I just pointed the camera at scenes that moved my heart and released the shutter. It was at this time that I first realized the joy of instantly capturing what I see on the spot.

A month later, when I picked up a bag of the developed positive films at the camera store, I couldn't wait to see inside. As I looked, they immediately brought me back to where I had been. In the films, I saw the scenes shine as I had seen them, I could feel the dry air of Spain. I felt the blood in my body was about 1°C warmer than when I first got the camera. 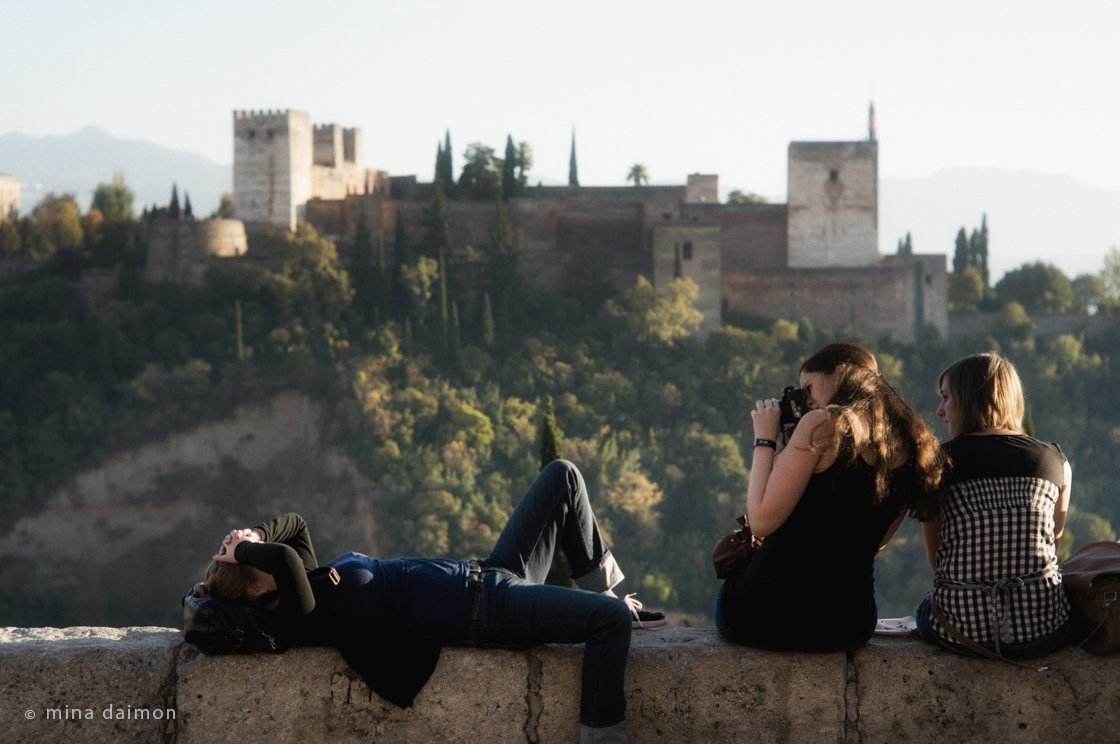 For me, the camera is a tool that takes me back to "that time".

No matter how beautiful the image is, it can't be compared to the memory I myself have. A single photo can evoke the feel of the cobblestones, the red dust, and the taste of Cafe Con Leche that's hot enough to burn your lips. Every time I take out the positive films stored in the back of the storage room and see them through the light, I can always feel the emotions I had when I took them.

Ever since then, cameras have always been with me. They are storage devices directly connected to my retina.

Today, too, I have my GRⅢ in one hand and Alhambra Especial in the other hand for snack.

【Profile】
Born in Yokohama, lives in Chigasaki. Mina Daimon became a photographer in the wake of an open call exhibition at Ricoh RING CUBE. In addition to her activities as a photographic artist, she collaborates with apparel brands, lectures for workshops and events sponsored by camera manufacturers and shops, and contributes to magazines and web magazines. Holds many solo and group exhibitions. Her works include "Today's Hakoniwa" and "Hama", and her publications include photobook "Hama" (Akakasha).
www.minadaimon.com