Hello! It's Machuko@- the admin.

We are very pleased that the number of people who applied for participation was as many as more than 800. Thank you! Those of you who participated, how did you like it?

Because we wanted to make it as "real" as possible, the entire program was broadcast live. So, even the transitions between programs were live (except for some).

And, we had so many programs. The guest presenters talked about the joy and depth of photography and snap shooting and about how photography connects people from their own perspectives. Thank you to all the presenters for the wonderful talks.

We broadcast from a studio in Tokyo. Although we did not know if it was technically possible, we wanted to do so much. The broadcasting crew generously responded to our difficult requests and tried different options, which enabled us to execute the two-day event safely without any major troubles. They were so professional. We really appreciate it.

With so many programs online, it was like an offline event. But I wanted so badly to see the faces and facial expressions of the participants during and at the end of the event! I'd like to do both offline and online next time.

Now, let me go through what we did in "GR SNAP WEEKEND" with photos! 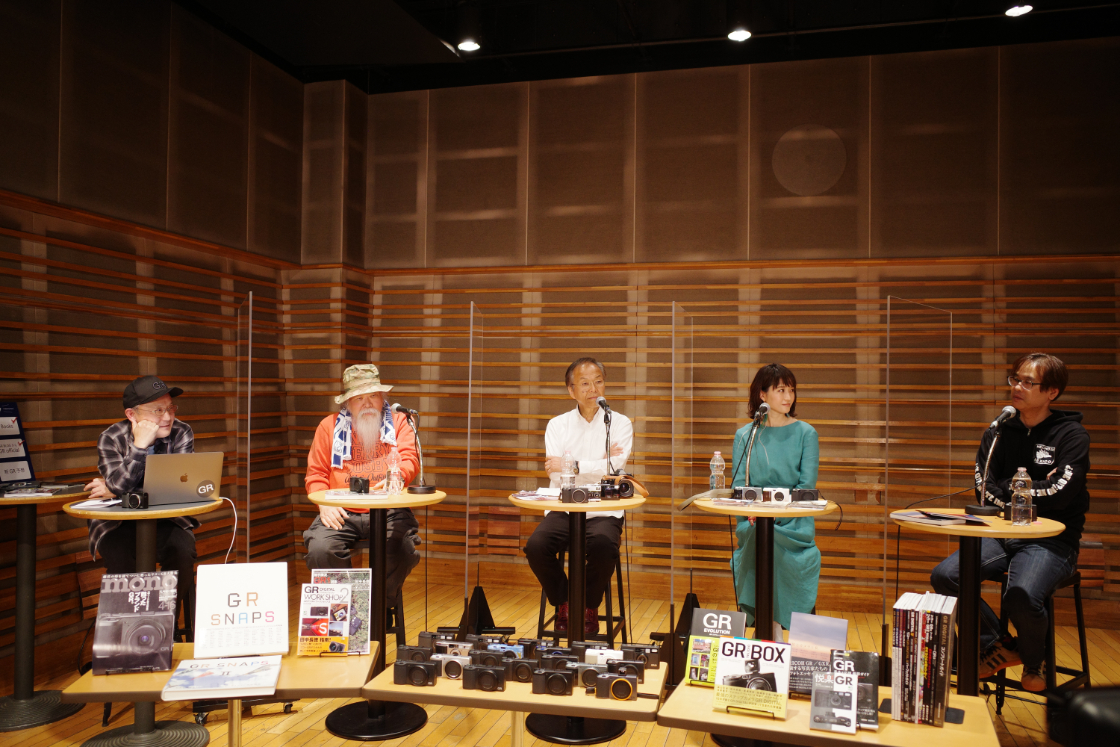 "GR Night Story" on Day 1. Former Ricoh manager Tomohiro Noguchi facilitated the discussion based on the theme night story. Each "GR Story" was so interesting. It was like a cross-industry exchange meeting and there were some stories that we had never heard of. 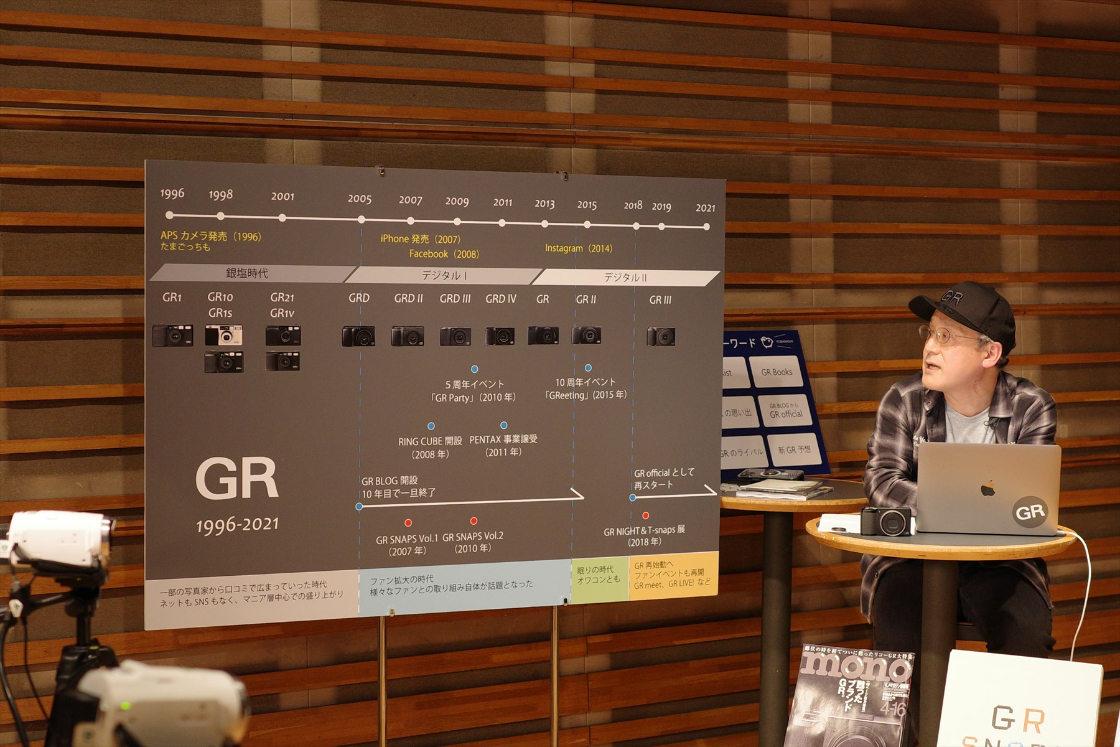 It was moving for us to make the GR history panel. We were all healed by Eri Takenaka's singing voice! There were more than 160 entries. Of the 15 works selected for the review, some of the photographers appeared online. They were able to directly talk with the reviewers Koichi Akagi and Satoru Watanaber. Being online enabled us to have reviewees from Niigata as well as from New York! Those of you who entered, thank you very much. 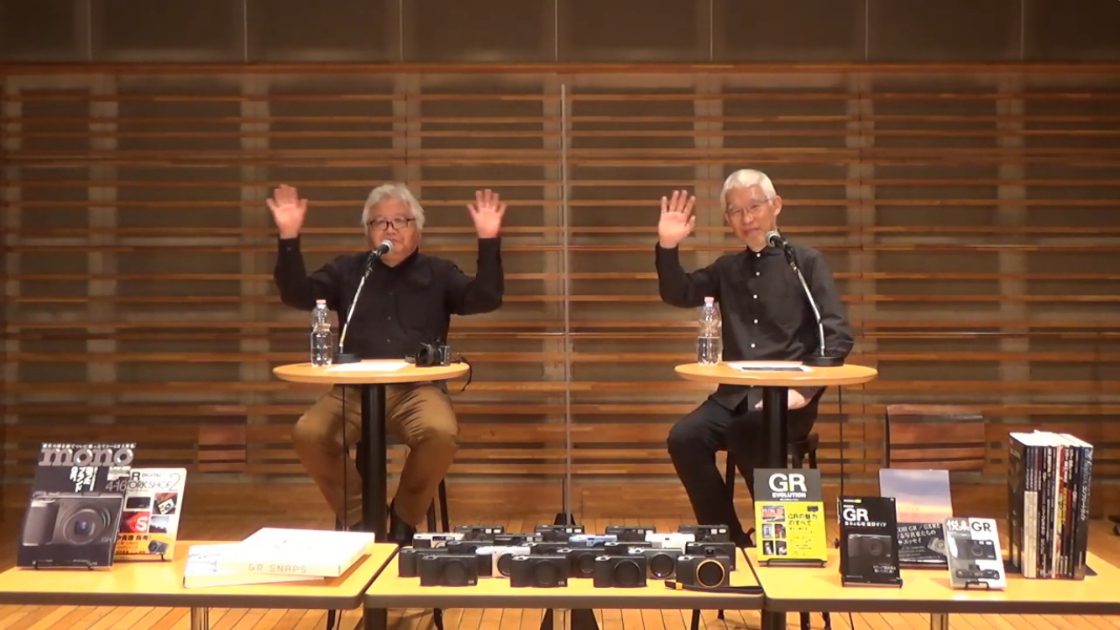 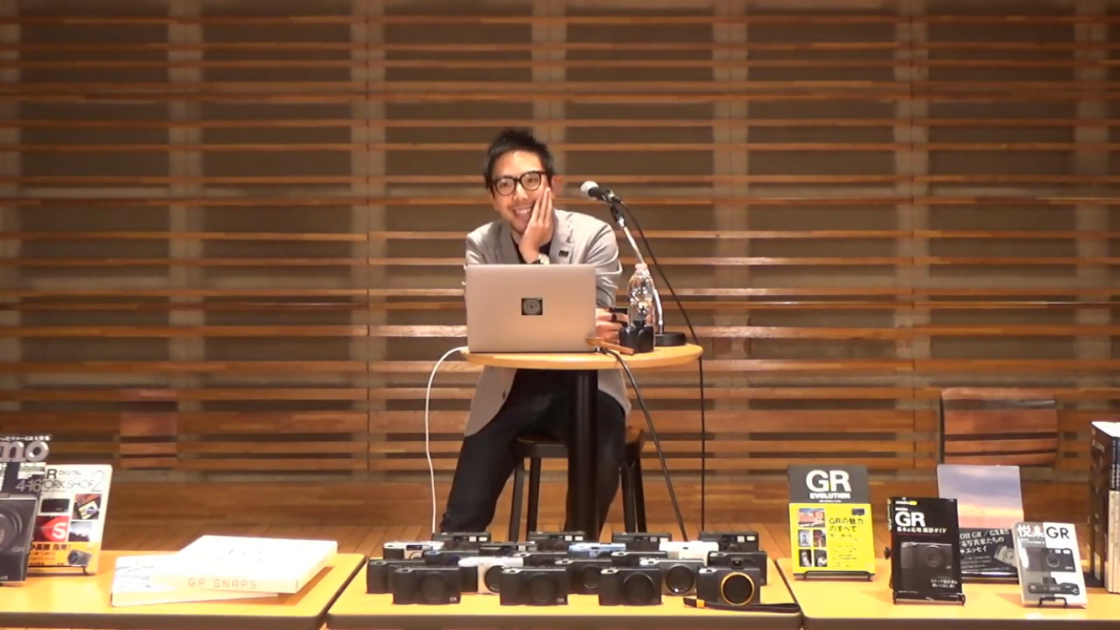 After Mr. Akagi and Mr. Watanabe, Tomas Hara started his program with a cute comment "I feel lonely being just by myself". Usually, his street snapshots are mostly black and white, but this time, he shared his technique to use Image Control by showing his color works! They were so cool! 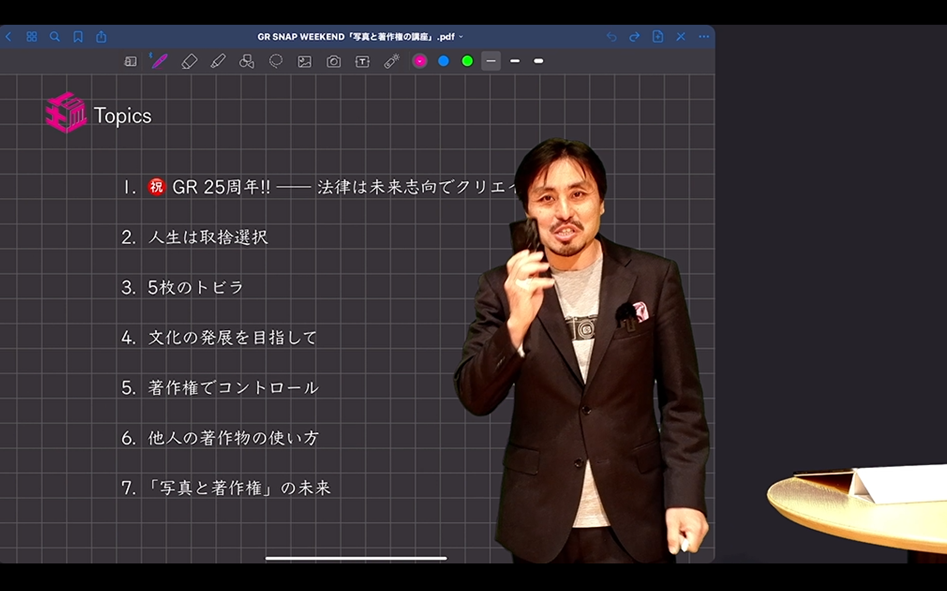 Next, Mr. Kazuhiro Shiozawa. Many of us have come to use social networks, and the topic of "copyright" has been much talked about. So, he discussed copyright issues regarding photography. Being a university professor himself, Mr. Shiozawa's presentation was not only meaningful but also very easy-to-understand and fun. It was just like a real university class! He was talking in front of a green screen like this. Please see Mr. Shiozawa's blog for detailed technical background. 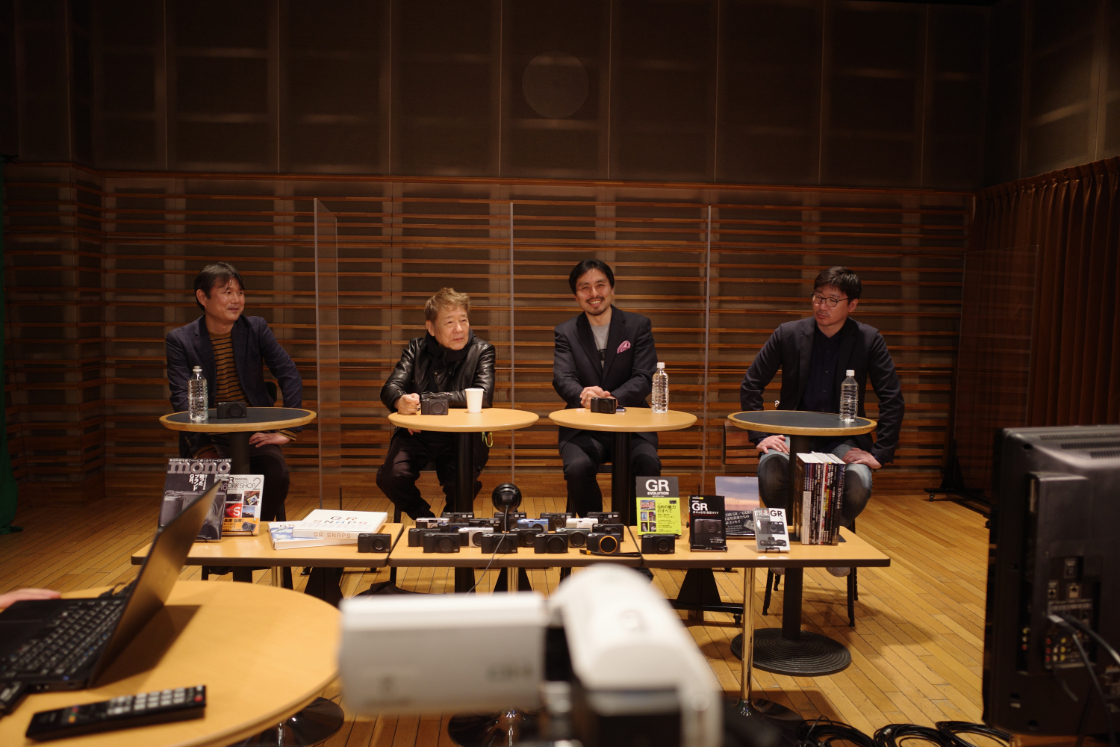 Then, free discussion on Zoom. I was worried about how many people would participate, but more than 50 people did. Herbie Yamaguchi and Kazuhiro Shiozawa joinded from the studio. Our product planners also joined. It was a fun small talk. We introduced the newly released case and strap with the GR logo too. People from "GR Fes". They were the only ones who were completely online this time. They love GR so much that they organize their own event called "GR Fes" on their own. They shared their slideshow with talk as they always do! We were able to see a slightly different aspect of the GR world with their unique photos and presentation. By showing many of his works, Herbie Yamaguchi talked about how he faces photography, people he met through photography, as well as his heartwarming experiences. You can find some of the works he shared on this day in the "SPECIAL Corner". Please be sure to check them out! 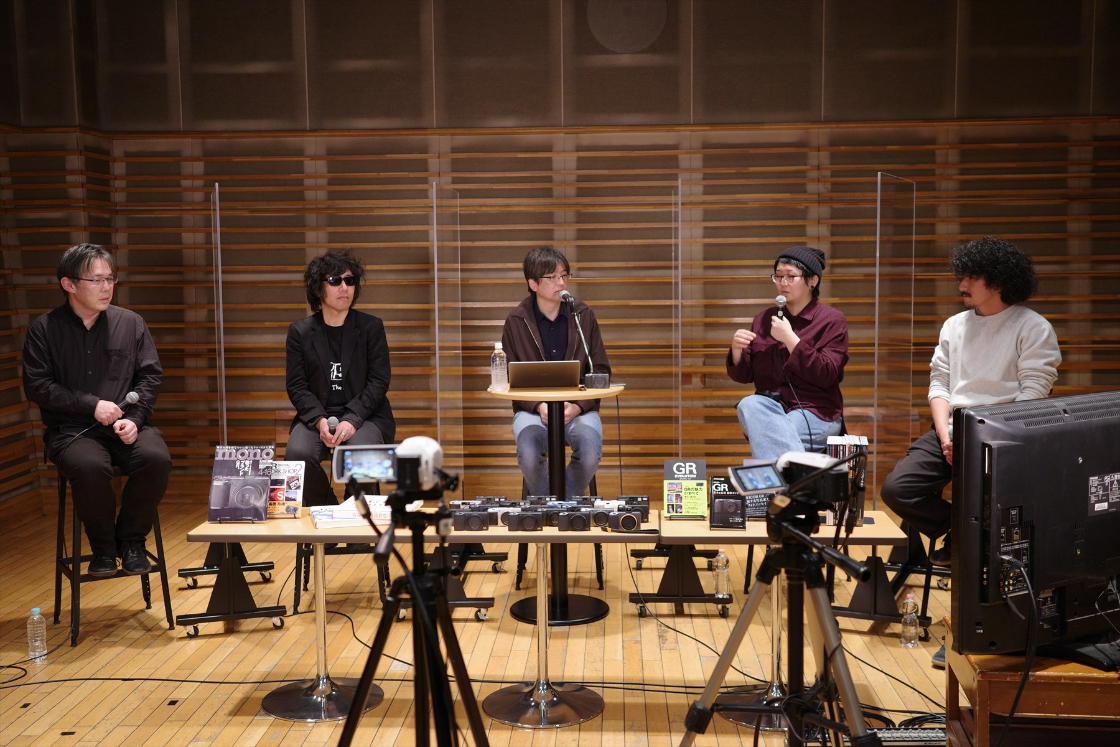 The final program was "GR Roundtable". I was very interested in how each photographer thinks, views, values and interacts with snapshots. "When it comes to snapshots, it's said to be difficult to take street snapshots today, but that's not true. That's only because we are narrowing our world by ourselves." We all nodded.

From here, let me show you some extra photos behind the scenes. 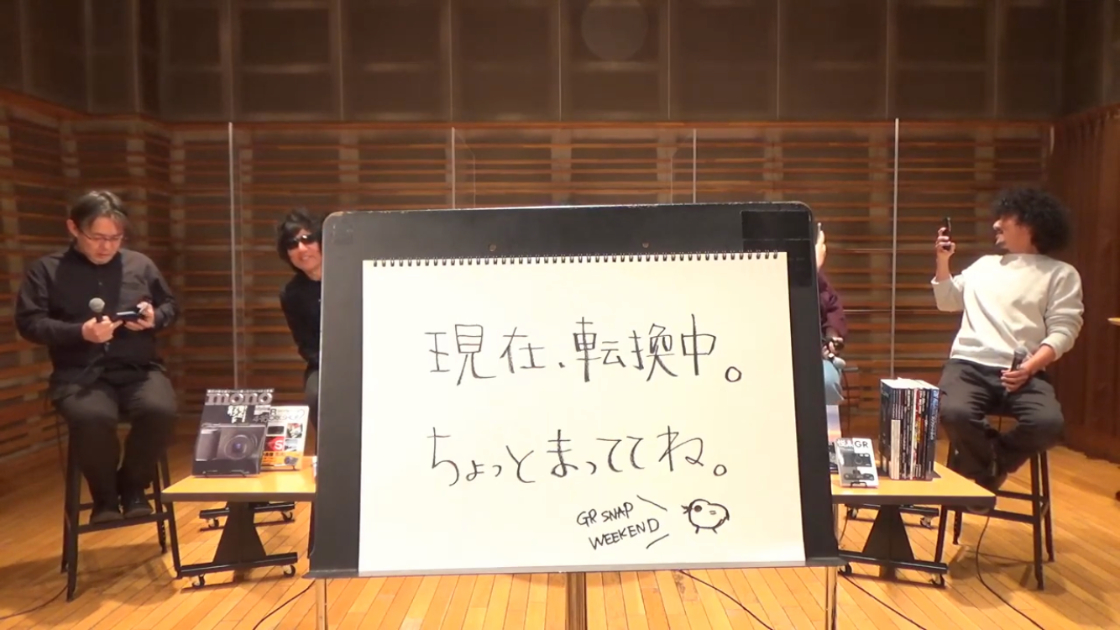 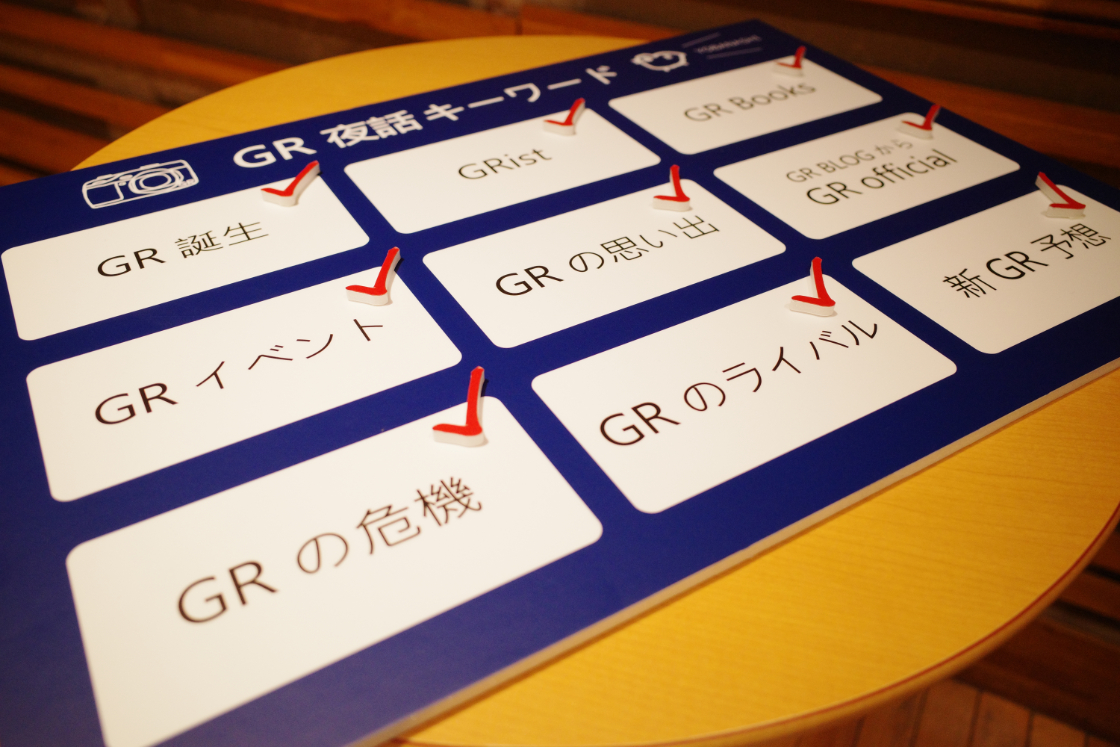 The list of topics for "GR Night Story" on Day 1. I'm glad we could go through all of them in time! Applause to Mr. Noguchi! The moderator Asakura waiting for the timing to appear. Just between you and I, he bumped into the monitor when he left.

It was probably the longest event in GR history. I'm glad we did it.

There may have been some inconvenience during the event. We will make the most of what we learned this time. Thank you again to all the participants, presenters, and studio crew! 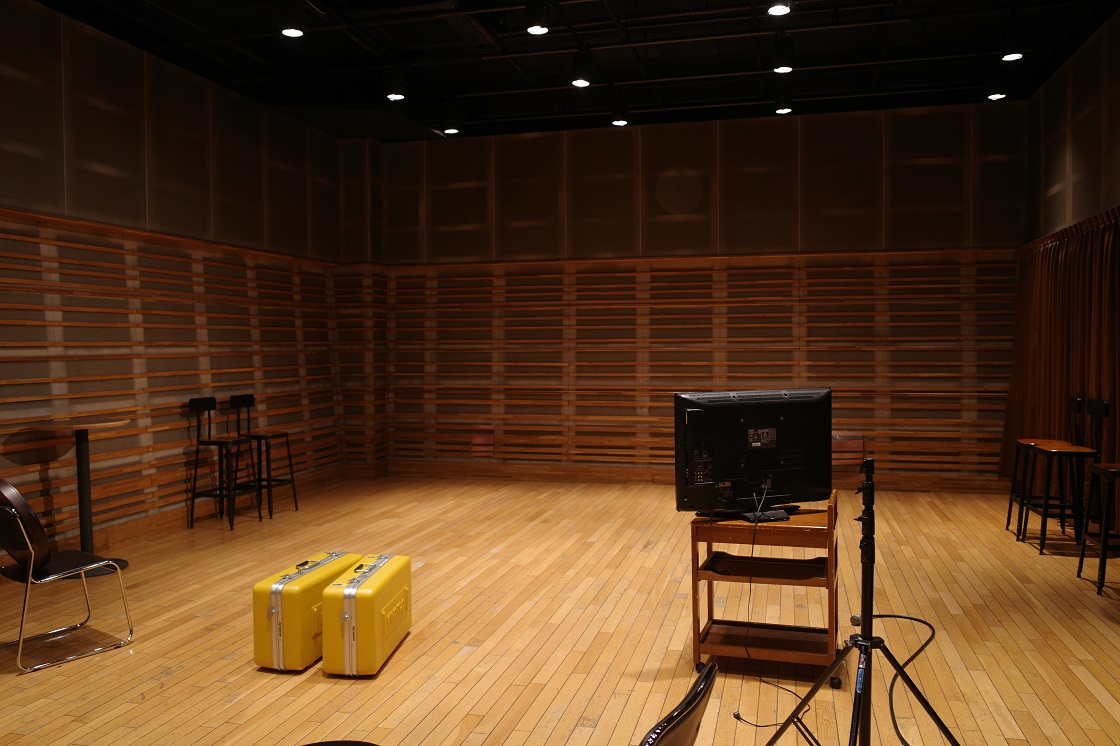 Vacant studio after the event. Let's do it again. 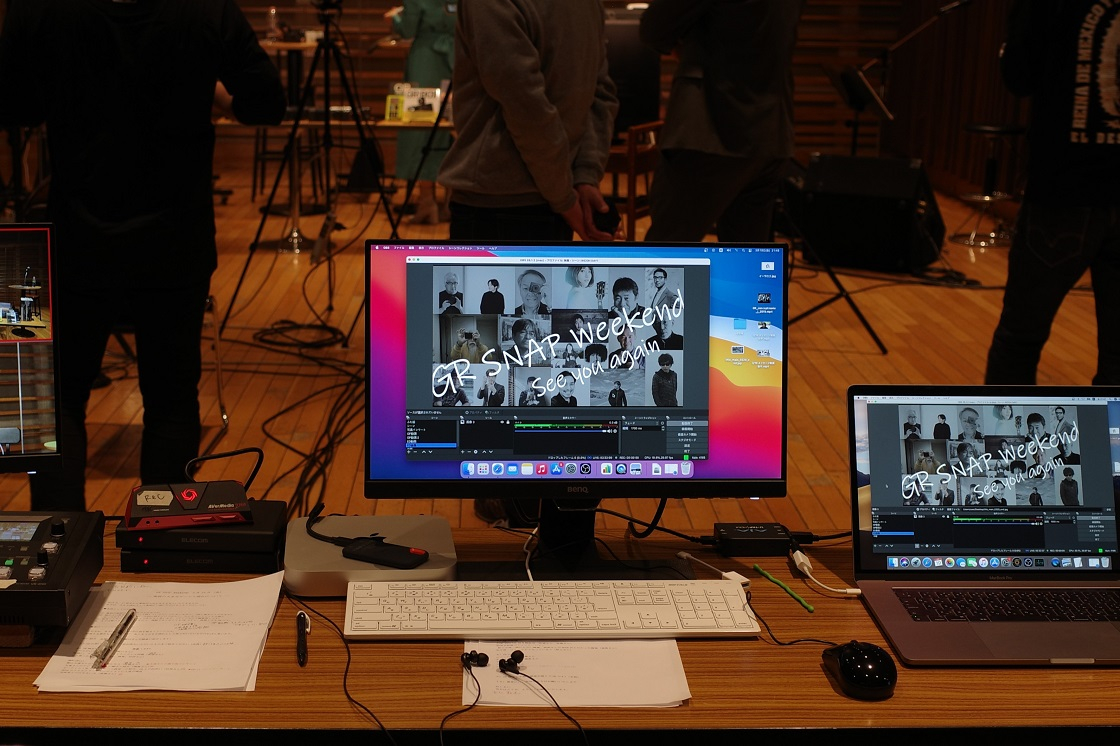 We will meet again!!