Hello! It's Machuko@- the admin.
This is a report of "GR meet online Vol.2" held on Saturday, October 24th!


This time, we welcomed our guest photographers Yukio Uchida and Takehiko Nakafuji to have a two-part event for the day and night- photowalk in Kuramae (Tokyo) during the day, and review of the works from the photowalk and through the web as well as slides and talks at night as an online event (because there was so much they did on the day, this report has become so much as well). 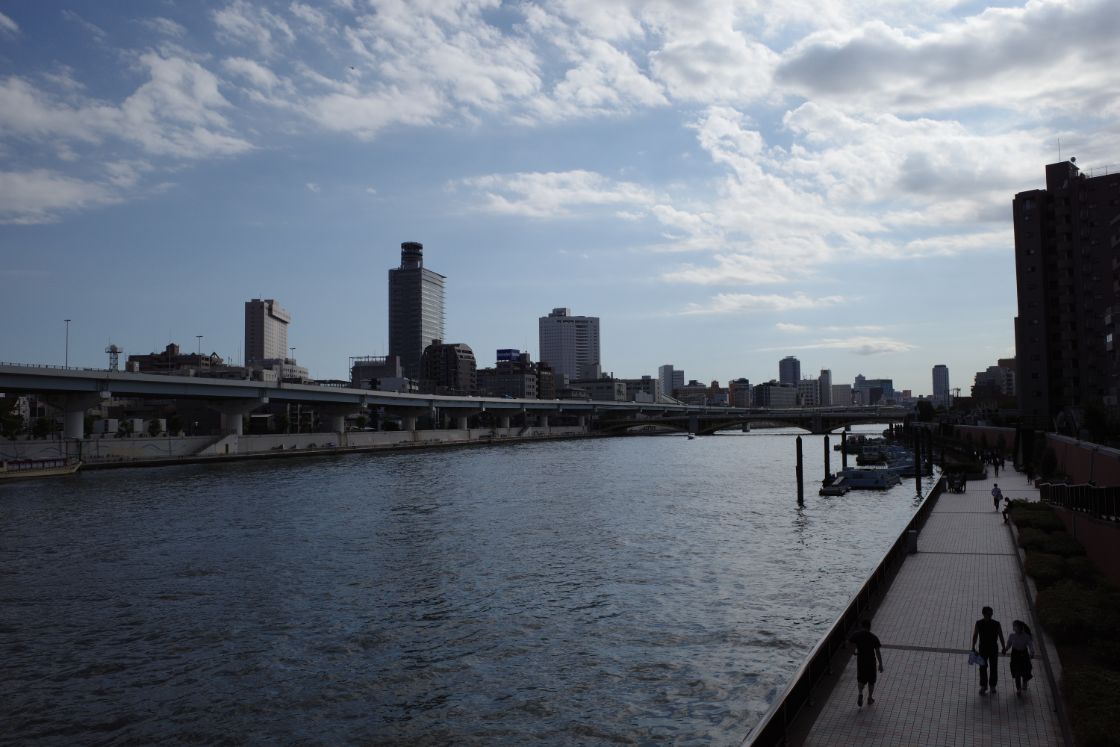 First, photowalk during the day.

It had been a while since we had had a GR official event to be together with the fans, come to think of it, since last year's GR Bar. All the staff were really happy to have such an opportunity and were excited about it! Thank you to everyone who participated!
* We took such measures as wearing masks, thorough disinfection, and temperature measurement.

There were 19 participants (one of them was unfortunately absent due to physical condition. Please come another time!). In clear and pleasant weather, we took a walk around the city of Kuramae, Tokyo. They were divided into two teams- Yukio's and Takehiko's.

And this time, Yukio's team had a little game to play, suggested by Yukio himself. As mentioned in Ninzaburo's article, each participant was assigned a shooting mode (setting) by a raffle and they shot in that mode. The settings were...

Those 10 modes (settings) in total. 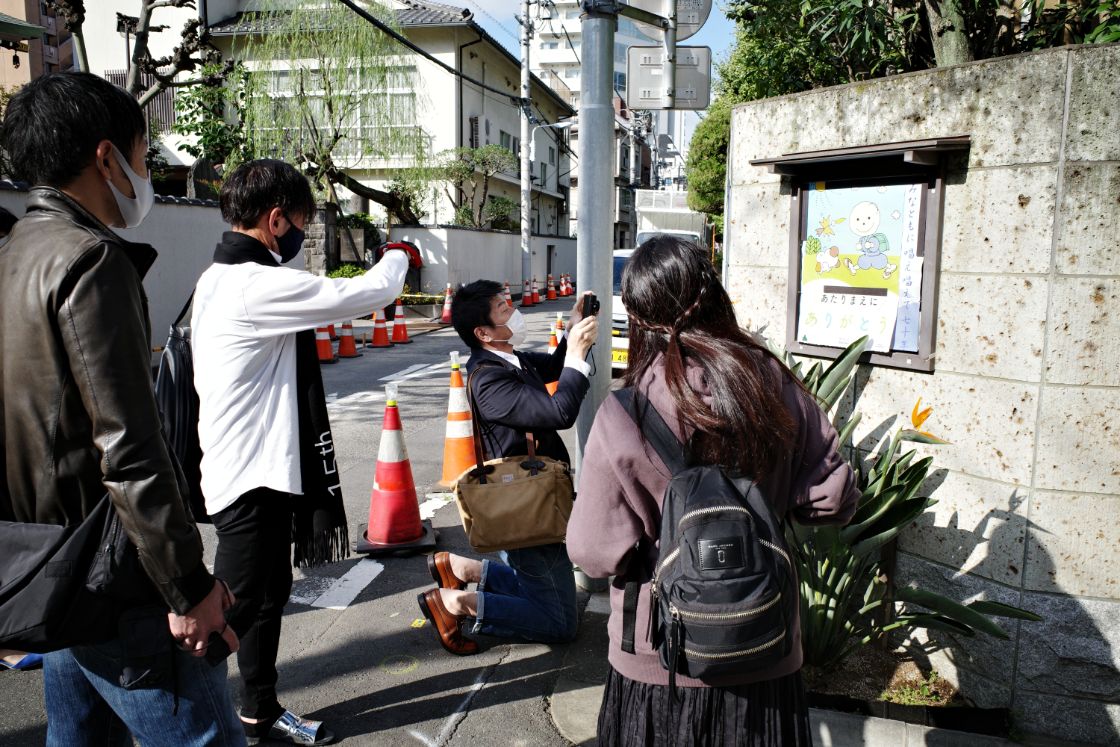 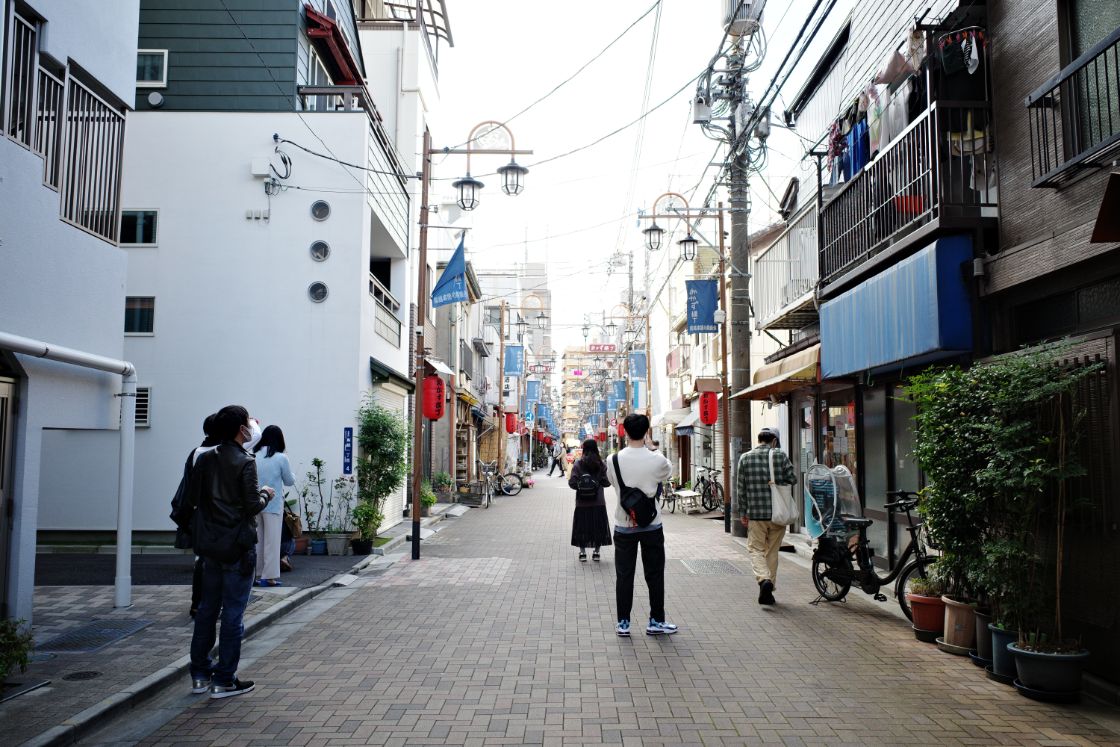 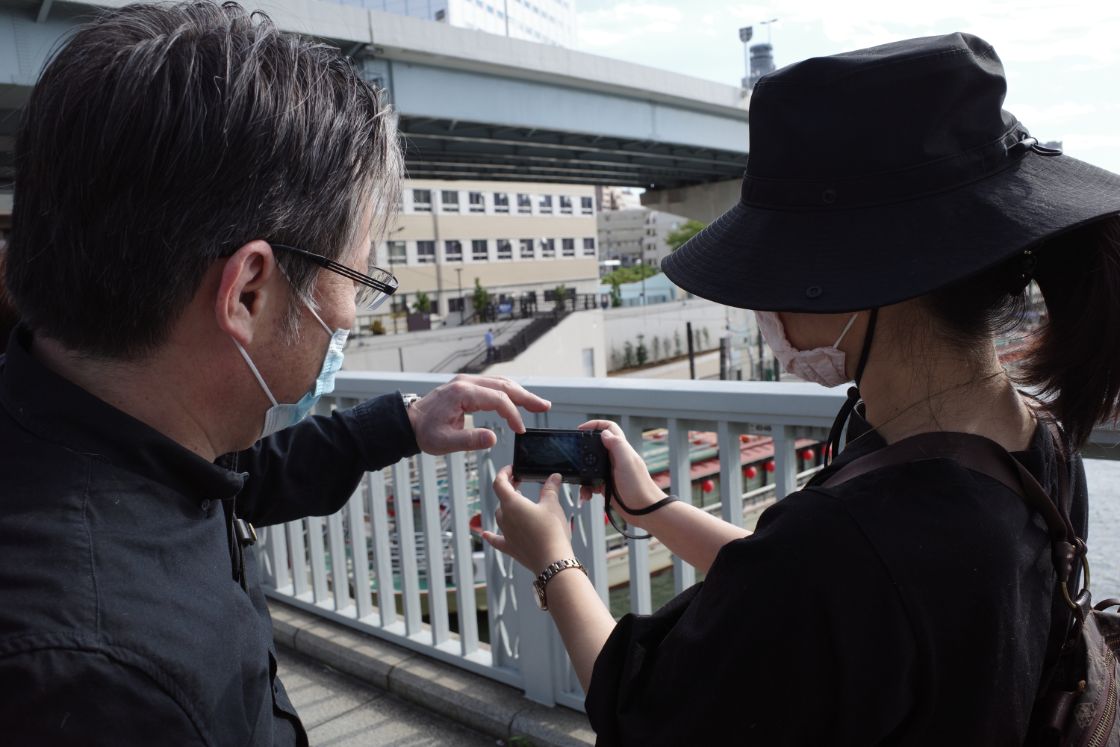 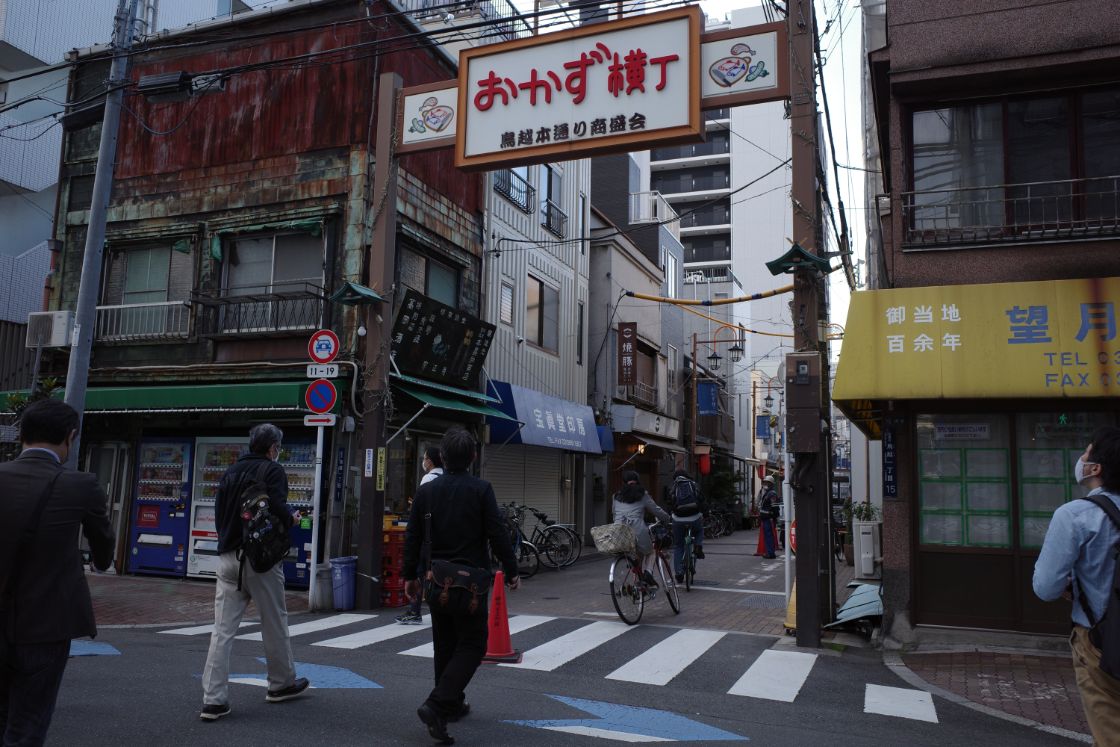 Some of them liked the assigned setting, some of them used it only occasionally, some of them had never used it... every time they drew, they went “oh !” while Yukio was looking at them with a smile. The intentions of the game were revealed in his slide and talk later on the day.

Takehiko's team took photos of Kuramae with a guide by the guest photographer. At the pre-meeting for this event, Takefuji said he had never been to Kuramae, but on the day of the photowalk, we were surprised that he was able to guide the town in detail like this building was built in the year xx, or this restaurant was popular for their xx and so on (he said he had done location scouting twice in advance). 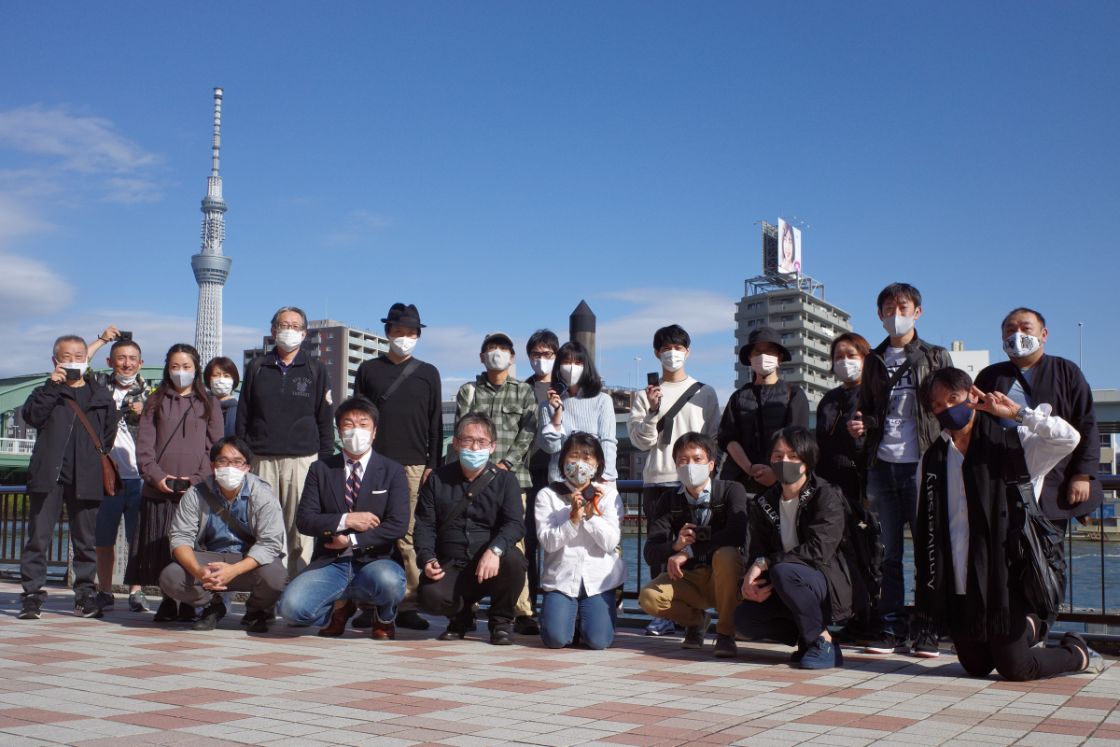 Then we had the online event at night. This time again, as many as about 300 people participated. Yukio and Takehiko were at Ricoh Imaging Square Tokyo, the same place as our staff, and live streamed.

We began with the review. 19 works (1 work per person) from the participants of the photowalk during the day, as well as 10 works selected by the GR official writers from approximately 150 works submitted online with the theme of "1 mile snap". The two guest photographers commented on each of them.

We learned so much from their comments. The atmosphere of Kuramae, unique depictions of Kuramae, impression of the city varied depending on the shooting mode or setting, how to find the subject, how to capture light and shadow and so on. Above all, they were impressed that the level of the participants' works was high. 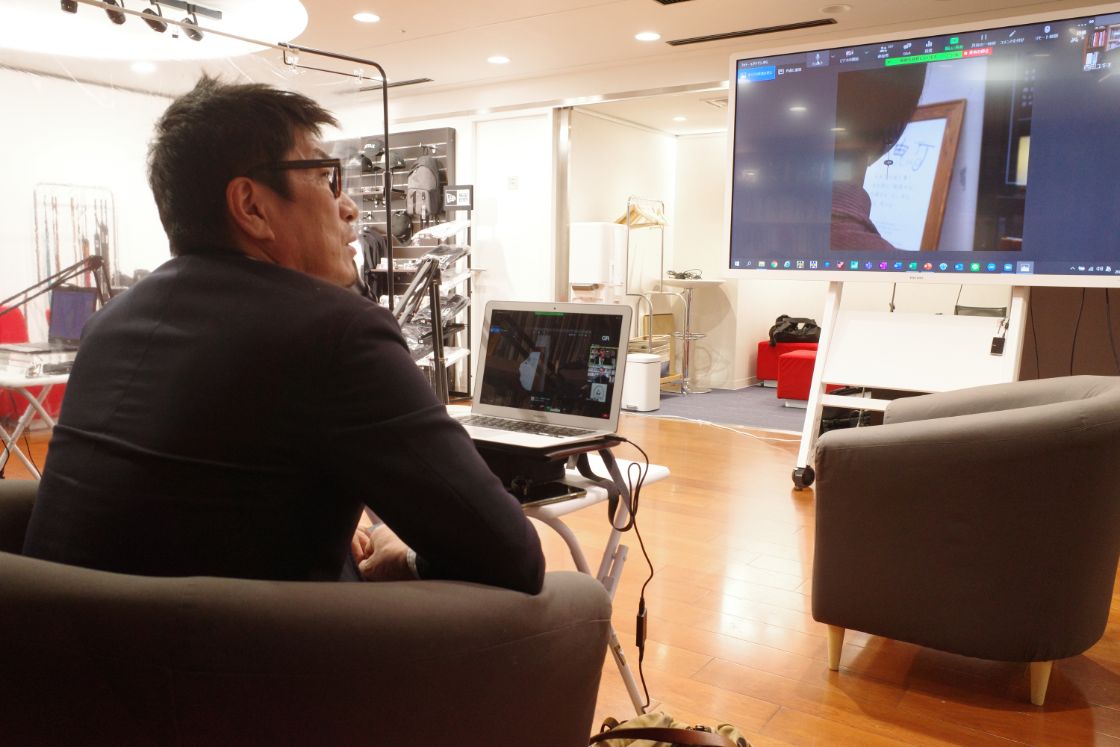 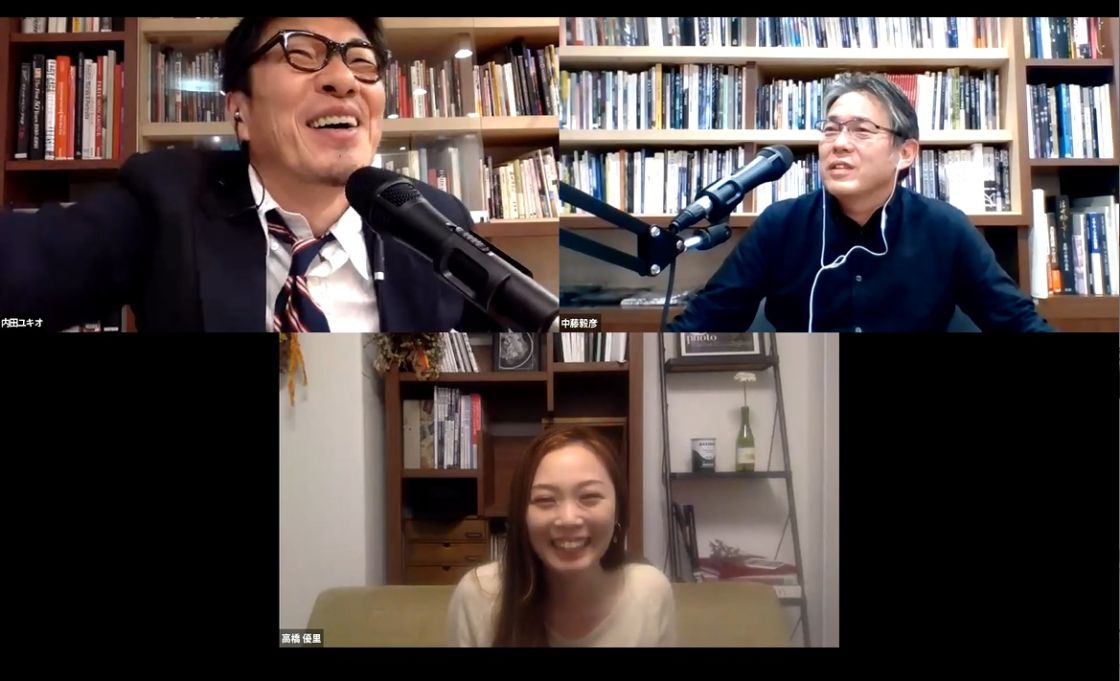 Some of the participants agreed to appear online! Something special about live streaming. We got nervous because they were nervous.


And this time, we had some participants appear online for the review, which was something unique to online events. We could hear what they had to say about their works, intentions and settings, and the reviews. Two-way communication was really good.

Here are a few of the works by the participants from the photowalk.

And here are the selected works for the review, submitted through the web with the theme of "1 mile snap".

After the review, we had the guest photographers' talks with slides.

Yukio Uchida went first and talked about “Power of Words, Power of Photography” and delved into them by explaining in detail what each of them is good at as well as not good at.

People recognize and share things with words, but because they are so digital, human emotions, for example, can be difficult to be expressed in words.

He thoroughly discussed the above using many “words” and “photographs”.

And about the modes (settings) assigned to the participants during the walk.

Given a mode (setting) you are not accustomed to, you can be more clear about who you really are by trying to find your way to use it, to express, and by searching for your unique method of expression. That was the reason for it.

Also, by using a function or mode you don't usually use, you can discover something new about the GR and about photography.

He was very much impressed with the works that they had taken, and commented on each of them by digging into the feelings behind them.

Finally, about the “camera”.

Some cool and dry people say that cameras are a tool for taking pictures, but for him cameras are to warm your heart. One of his favorite things about GR is that if “his GR” is stolen and given a new one, he won't like the new one because he likes HIS GR. He thinks that's what digital cameras are lacking today. Cherish the joy of “GR (camera)” and enjoy photographing more. 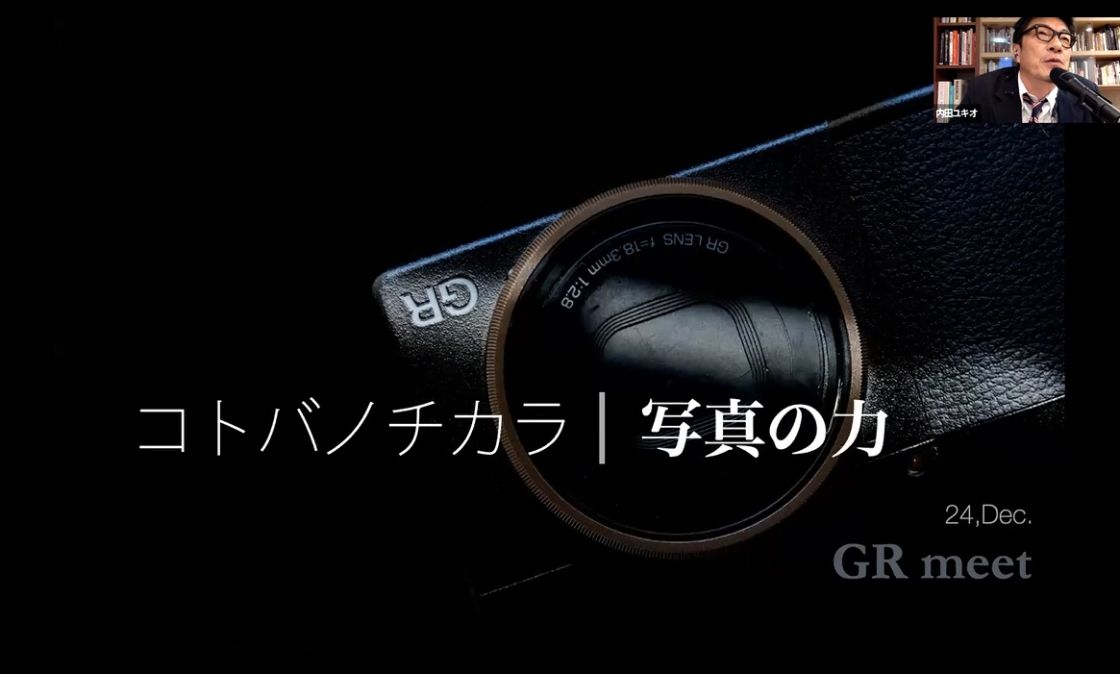 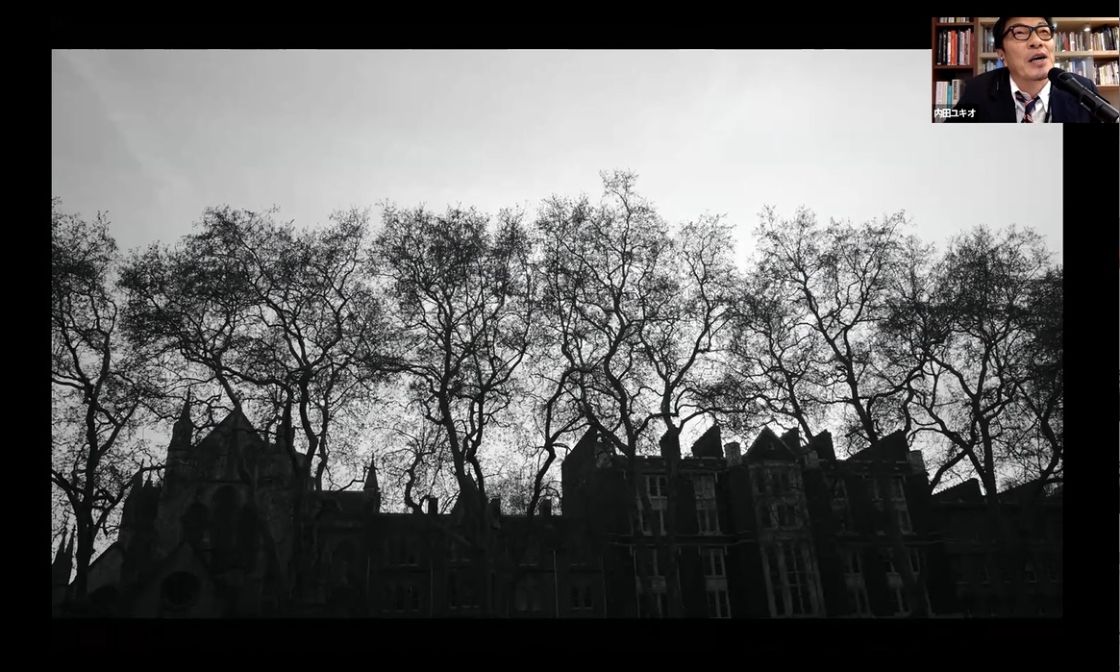 Because he wanted to present something through photos, instead of words, he showed 80 works every 15 seconds, and talked about them. It was very special because they were not only images of Kuramae (from both the photowalk and location scouting) but also his unpublished images of Tokyo (Shibuya, Shinjuku, Ikebukuro, etc.) .

In the course of explaining his works, he said that taking high-contrast black and white photographs is based on his physiology.

When he looks at things, he sees them in light and shadow, sees things in form. It's like seeing the world in black and white, or converting the color image into black and white in his mind. He has been shooting in this style for over 30 years and he won't change it.

He said to the participants that each one should listen to his/her own physiological sensations or inner voice. Photographs by the book are boring. Take your own photos, not good photos, be true to yourself.

Also, in connection with his recent exhibition with photographs taken 20 years ago, he found that some of them had been taken with a film GR. Even after 20 years, he felt the power of photography at that time was still alive. He would be happy if he could leave his works in prints and people would enjoy them even after he died. And on this day, he was pleased that he could show some of his unpublished works. 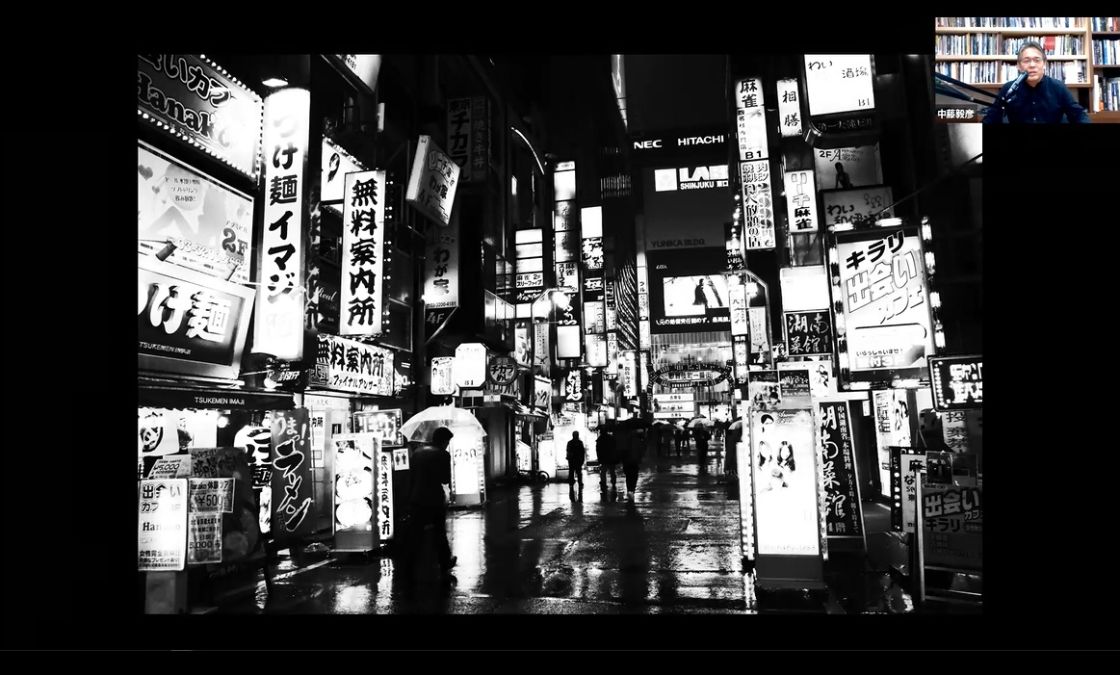 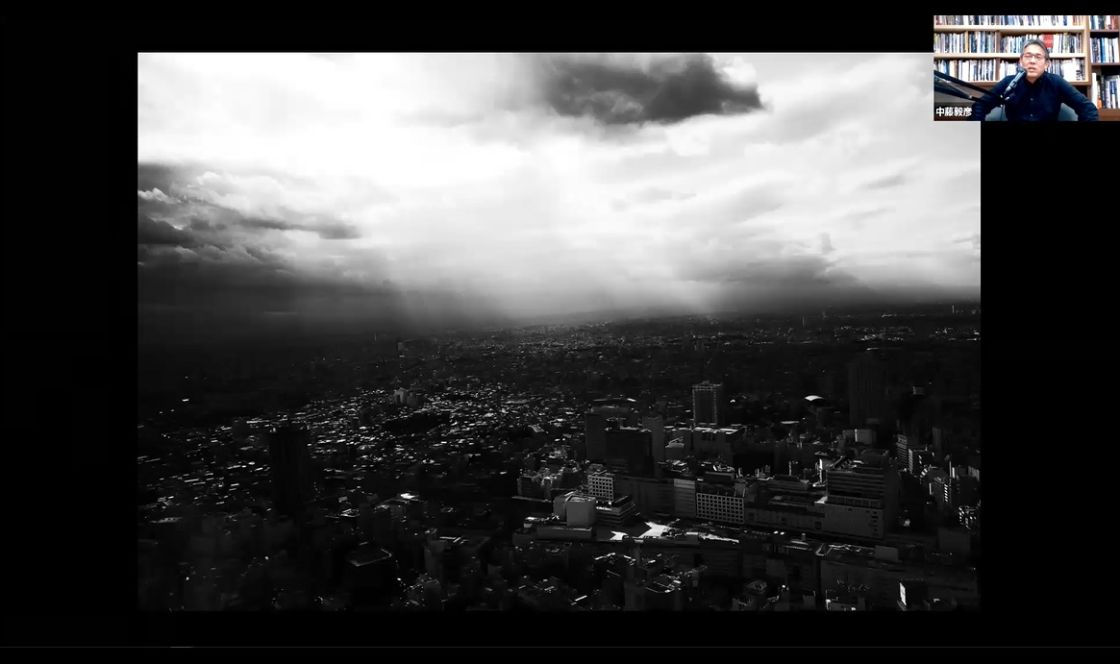 Going over the scheduled time, we had the final talk session.

They commented on questions in the chat. About film and digital, how they choose a camera, places they want to go to first when the COVID-19 is over and so on.


Although they have different approaches, both of their talks, including the slides taught us the importance of how you put your emotions into photos.Therefore take your own photos. Your works can evoke something in the heart of the audience.


Thank you again to Yukio Uchida and Takehiko Nakafuji for spending a long time from day to night! And thank you to everyone who participated!

Finally, let us show you the photos of Kuramae by the two photographers!


★ Comments and works by Yukio Uchida
For us, people in the camera industry, “COVID-19” started from the cancellation of CP+ in 2020. I'm wearing the costume I was planning to wear on the first day of CP+ (Andy Warhol's cosplay!), because it is a new step forward- we were able to have a photowalk again today, and an opportunity to have a place to meet including online. I have been very happy and enjoyed myself spending the day with my respected Takehiko Nakafuji.

★ Comments and works by Takehiko Nakafuji
It was a photo session with a large number of people for the first time in a long time, and I enjoyed shooting very much. There was a time when I was completely beaten up and depressed due to the COVID-19, but walking around the city today, I felt that people's lives were strong. It was very inspiring. I thought it was a mirror to reflect the time and that's the role of photography. It was great shooting with you today and getting motivated for snap shooting.

And the usual “everyone's GR” for GR meet!
Thank you to everyone who posted!

We are planning to have more online events. Feel free to join us.

And we hope to increase the number of offline events little by little as well. We are looking forward to seeing you all! 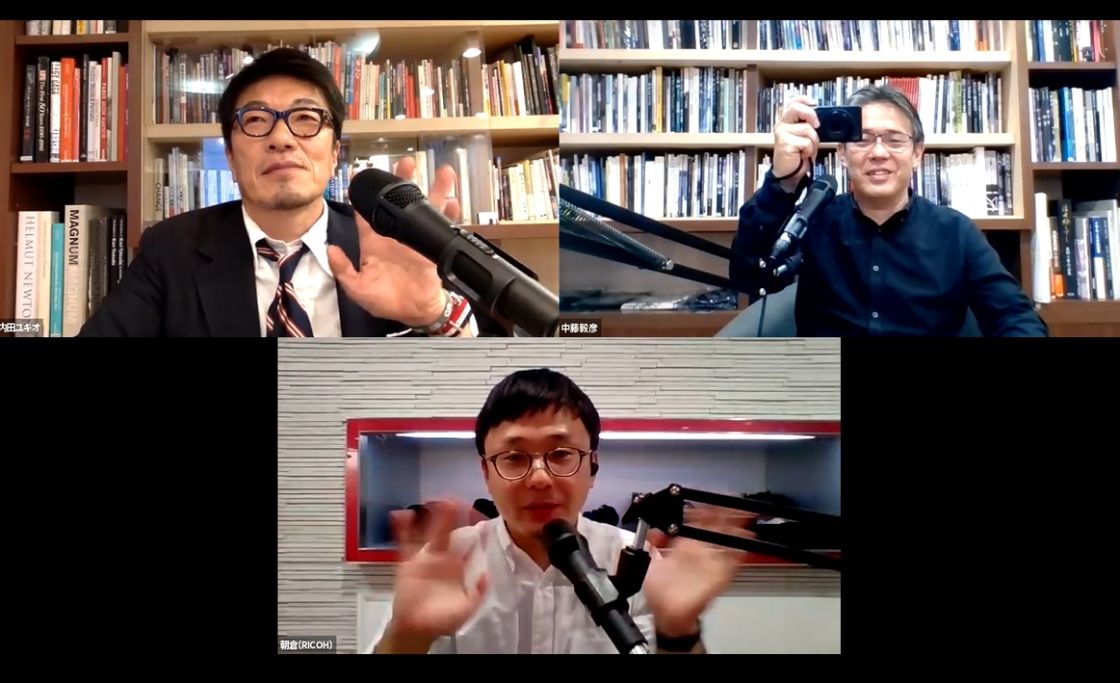 Feeling Part of the Universe (Robert)